From THE BELFAST TELEGRAPH:

The Catholic Church has established an exorcist hotline in Milan, its biggest diocese, to cope with demand and the number of demon-busting priests on call has increased from six to 12.

Monsignor Angelo Mascheroni, the diocese’s chief exorcist since 1995, said, “People in need can call and will be able to find a priest in the same area who doesn’t have to travel too far.”

He said he knew of one exorcist who had been seeing up to 120 people a day. “But with so little time per client he was only able to offer a quick blessing. That’s not enough. There should be two to four appointments a day, no more, otherwise it’s too much.”

It’s not clear why the number of suspected possessions has risen so sharply. But Monsignor Mascheroni said that part of the increase might be explained by the rising numbers of parents having difficulty controlling disobedient teenagers. 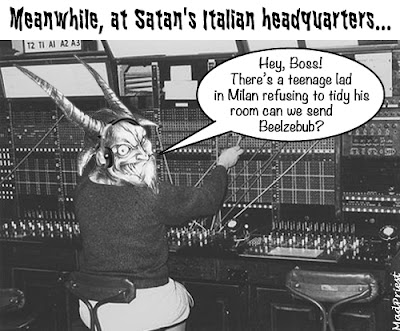