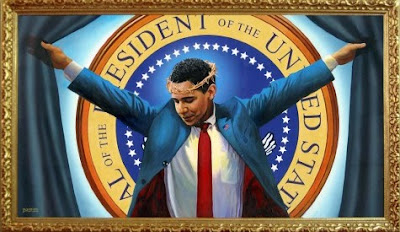 The Obama as Jesus painting named “The Truth” is being criticized by the Catholic League for Religious and Civil Rights. The painting depicting President Obama as Jesus Christ with a crown of thorns on his head, crucified against the presidential seal, is currently on display at the Bunker Hill Community College art gallery in Boston. The artist Michael D’Antuono defends the Obama as Jesus painting, arguing that his “First Amendment rights should override someone’s hurt feelings.”

Full story at THE INQUISITR.