After 40 years of serving the Catholic Church, Father Roy Bourgeois was dismissed from his religious order last week. Father Bourgeois was excommunicated in 2008 because of his support for women's ordination, but a local viewing of his documentary "Pink Smoke over the Vatican" is continuing the discussion for him.

Father Bourgeois says it's not complicated: refusing to ordain women is sexist and isn't backed by scripture.

"Who are we as men to say that our call from God is authentic and yours as women is not. What I see here is a grave injustice against women and our loving God. The Vatican is saying there can't even be discussion on this topic and my answer is we are not children, we are adults."

The Roman Catholic Diocese of Rochester declined an interview but gave a statement, saying in part that the "Catholic Church has no authority to confer priestly ordination on women and that this teaching is to be held definitively."

Every seat at the Cinema Theatre was filled for Tuesday's showing. A recent New York Times poll found that 59 percent of American Catholics favor the ordination of women. 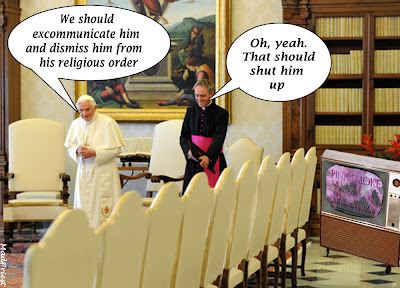