The band took its name from God Speed You! Black Emperor, a 1976 Japanese black-and-white documentary by director Mitsuo Yanagimachi, which follows the exploits of a Japanese biker gang, the Black Emperors. The band was formed in 1995 in Montreal, Quebec.

After stopping at a local gas station for fuel in the town of Ardmore, Oklahoma, during their 2003 tour of the United States, the station attendant working that day believed the group of Canadians to be terrorists. She quickly passed a note to another customer also getting fuel to call the police. When the local police appeared, the group was held until they could be questioned by the FBI. Although the police were suspicious of the band's anti-government documents and some photos they had (such as those of oil rigs), they found no incriminating evidence. After background checks were run, the ensemble was released from custody and continued on their way to their next show in Columbia, MO. Efrim Menuck later spoke to the crowd about what happened to them during their appearance in Missouri and speculated that their origin was a motive for being released quickly ("It's a good thing we're nice white kids from Canada"), hinting at racism in the police force. The incident was mentioned in Michael Moore's book Dude, Where's My Country? (WIKIPEDIA) 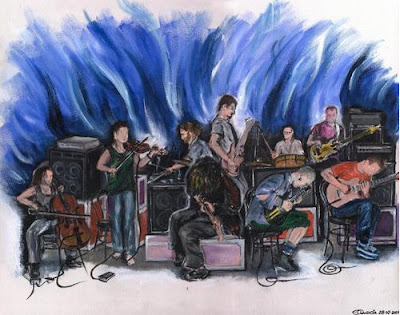