"Kissing a Buddhist monk on his lips is indecent," said Vuong Duy Bien, director of the ministry's department of performing arts. "Our society is not ready to accept homosexual kisses."

The pop star auctioned a bottle of wine on Nov 4 to raise funds for a cancer victim and had promised to kiss the winning bidder. Two Buddhist monks won after bidding US$2,636. Hung kept his promise, kissing the young monk on the lips and the older monk on the hand.

"Your sin has stained the Buddhist robes," a reader wrote in the Tuoi Tre newspaper.

The monk who was kissed on the lips was dismissed as manager of Quan Am pagoda. Both monks have been barred from leaving the monastery and ordered to break off contact with the outside world for three months.

The singer apologised. He faces a fine and a ban on performing for up to three months.

I doubt that there was any staining of robes. It was only a kiss. Anyway modern detergents are excellent at getting rid of what English adverts have always referred to as "personal stains." The Buddhist robes would scrub up as good as new.

I have no idea if Vuong Duy Bien is gay or not. Certainly, both young men in the photo below appear to be enjoying themselves if their microphones are anything to go by, especially the monk. 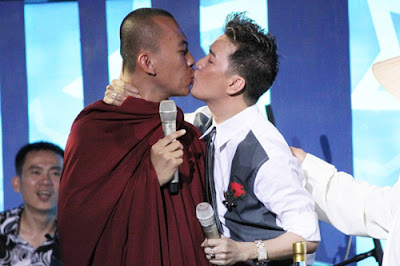 Back in the day when the music business in England hated the idea of young male pop stars coming out, mainly, it has to be said, because it affected the number of sales of their records to the teenage girl market, the  most reliable way to work out how likely it was that a particular star was gay was to look at their videos. The more outrageously gay the singer the more nubile, young women surrounded him.

Here's a vid of Vuong Duy Bien. If you are a monk of any religion please do not watch it. I don't want to be responsible for any robe staining incidents.