Over the next few days, China will slowly lift the veil of secrecy that has shrouded what appears to have been a contentious leadership transition. More than 2,000 delegates to the 18th Party Congress have gathered in Beijing to choose the next president and premier of China, as well as the other members of the elite standing committee of the politburo. 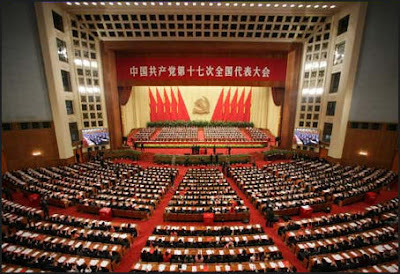 According to Ruth Gledhill at The Times, the nice lady who works behind the counter at the Pearl Harbour Chop Suey House at the end of her street has revealed to her, off the record, that the Chinese Congress has already made it's decision and in a complete break with tradition has chosen a foreigner to lead their country for the next ten years. Although there has been no official announcement as yet it is widely believed that the new President of Communist China will be the Bishop of Durham, Justin Welby. Bookmakers throughout China have suspended the taking of bets on Mr Welby.

Very important people in the Church of England are understood to be spitting feathers as Bishop Welby had agreed to be the new Archbishop of Canterbury only a couple of days ago. Former archbishop, George Carey is reported as having stated that "Welby is no better than Adolf Hitler," and the head of the Church of England, Queen Elizabeth II, has crossed the commie loving, northern prelate off her Christmas card list.

There could be even more embarrassment ahead for England's number one church. It is rumoured that members of the Crown Nominations Committee were so confident that the Bishop of Durham would accept the Canterbury job that they couldn't be arsed to choose a sensible second candidate. So they stuck a pin in "Crockfords."

The next Archbishop of Canterbury will now be the Reverend Cynthia Daftbucket, a retired non-stipendary minister from Bishops Gossip, Norfolk, who accepted David Cameron's invitation to take up the post before officials from Lambeth Palace could get to the Prime Minister to tell him it was just a joke.