Comedians throughout the world are all hoping for a Mitt Romney landslide victory today and a return to the glorious days when, if you couldn't come up with anything new to joke about, you could always fall back on taking the piss out of the nutter the Americans had elected to be their president. For the last four years nobody has cracked a joke about Barack Obama. This is not a pro-leftwing thing as English comedians were merciless in their piss-taking of Hilary Clinton's husband. No, it is because Barack Obama is a great statesman who has earned the respect of people throughout the world who value calm, intelligent diplomacy. For four years we have felt safer.

People of America, if you must vote for another mouthy, arrogant, xenophobic Republican then don't start whinging about how the rest of the world looks down on you. We haven't for four years and that's completely down to the fact that you elected a decent, human being to be your president, a man not suffering from learning disabilities, senile dementia or sex mania for a change. 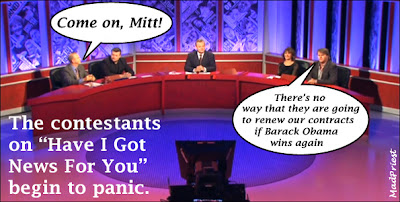