I adore Paul O'Grady. He loves dogs, Northern Soul and dressing up in women's clothes. What's not to like? 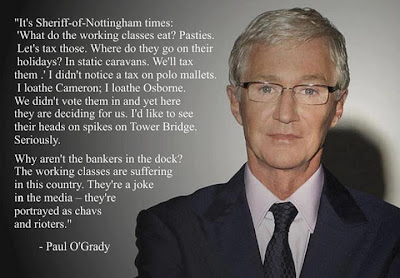 Born to a working class Irish migrant family in Birkenhead, O'Grady went through various jobs in his youth, including working in various bars, for the civil service and for social services, moving around the country to do so. It was whilst living in London in 1978 that he first turned his hand to drag, developing the character of Lily Savage based upon various female relatives of his. In 2003, O'Grady was listed in The Observer as one of the 50 funniest acts in British comedy, and in 2006 he was listed by The Independent at number 32 in their 101 most influential gay men and women in Britain. In October 2008, he was appointed MBE in the 2008 Birthday Honours list for services to entertainment. On 23 July 2010, O'Grady received an Honorary Doctor of Arts from De Montfort University, Leicester, in recognition of his outstanding contribution to television, radio and the stage. (WIKIPEDIA)