Steve Youngblood from City Church in Burlington, Iowa, is under scrutiny for saying he wanted to slap a woman in his congregation, after she reported the church to the IRS for displaying political pamphlets encouraging voters to remove an Iowa Supreme Court Justice who voted to legalize same-sex marriage.

A direct quote from Youngblood's sermon October 7th, that became public on his weekly podcast, refers to an unnamed member of his congregation by saying quote " I want to slap that person. Wake up."

Following with him saying, "What makes me madder is that person's husband won't correct them," and "Women need to sit down and shut up. I don't like rebellious women."

To be honest, looking at the photo of this particular right wing, gospel perverting misogynist I don't think he can afford to be that choosey about women. Well, not if he wants to get laid. 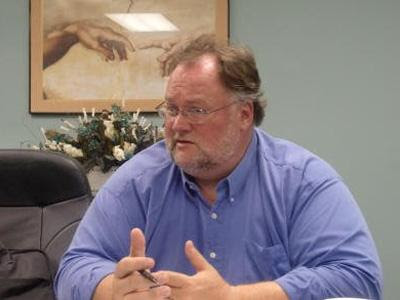