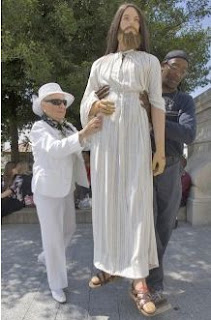 For more than three decades, Rita Warren has sat with her life-size Jesus mannequin outside the Capitol, earning her the name “Jesus Lady.” But she says Jesus’ fate outside the halls of Congress is in peril, and at 11 a.m. today, she will hold a press conference on the East Front of the Capitol to “release the names of those who want to remove Jesus from the Capitol.”

Warren’s — and her statue’s — problems began in July, when she was evicted from the Fairfax, Va., apartment she lived in for 22 years. Since her eviction, Warren has been hunting for who is trying to keep her and the mannequin from the Capitol.

The international media didn’t show up to the Jesus Lady’s press conference this morning on the East Front of Capitol as she announced who was behind the effort to remove her and Jesus from the Capitol. According to Warren, President Barack Obama and his “people” are behind her eviction and that in less than three weeks, Republican presidential hopeful Mitt Romney will win the presidency and restore her to good standing.

In fact, it does appear that a frighteningly high proportion of Republican supporters are crazy or homicidal or both. The right wing does attract an awful lot of the nastier kind of nutter to its ranks. For the life of me I just can't work out why that should be.