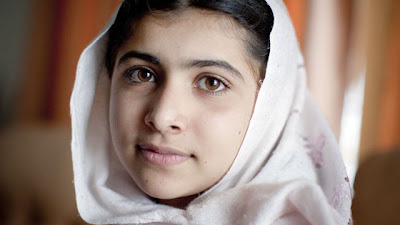 Malala has dedicated her childhood to championing education for girls like her in Pakistan. As she lies in a hospital bed, a tragic victim of Taliban gunmen, let's help make her dream come true.
One part of Pakistan has already started a successful programme of paying families which send their girls to school regularly. But in Malala's province the government is dragging its feet. Senior politicians have offered Malala help, and if we act now we can get them to commit to rolling this out nationwide.
Before the media spotlight moves on, let's raise our voices to demand that the government announces funding for all Pakistani girls who attend school. In days the UN Education Envoy will meet Pakistan's President Zardari and he says hand delivering 1 million signatures will strengthen his case. Sign and forward this email, and let's help make Malala's dream come true:
http://www.avaaz.org/en/malalahopenew/?bICEudb&v=18768
North-west Pakistan has been in the grip of the Taliban since 2007 when they systematically started burning and destroying girls’ schools. The Taliban destroyed 401 schools in Swat between 2001 and 2009 -- 70% of them were girls' schools. Malala drew the world’s attention to the Taliban’s reign of terror, when she started writing a blog in Urdu for the BBC. Her writing is a crucial record of the devastating consequences of extremism on the lives of ordinary Pakistanis.
Pakistan's constitution says girls should be educated alongside boys, and the government has the resources to make it happen. But politicians have ignored that for years, influenced by extremist religious groups, and now, only 29% of girls attend secondary school. Study after study has shown the positive impact on personal and national income when girls are educated.
Let’s turn this shock and horror at the Taliban’s attack on a young girl into a wave of international pressure that forces Pakistan to address girls’ education. Click below to stand with Malala and support a massive girls’ education campaign in Pakistan, backed by resources, security, and most importantly, the will to fight the extremists who tear down Pakistan:
http://www.avaaz.org/en/malalahopenew/?bICEudb&v=18768
Let’s come together and stand in solidarity with a brave, young activist, who is showing the world how one little schoolgirl can stand up to armed and dangerous extremists.
With hope and determination,
Emma, Alaphia, Alex, Ricken, Ari, Michelle, Wissam, Rewan and the rest of the Avaaz team
SOURCES
Pakistan girl shot over activism in Swat Valley, claims Taliban (The Guardian):
http://www.guardian.co.uk/world/2012/oct/09/pakistan-girl-shot-activism-swat-taliban
Malala Yousafzai: Pakistan bullet surgery ‘successful’ (BBC):
http://www.bbc.co.uk/news/world-asia-19893309
Pakistan: The schoolgirl the Taliban tried to kill (The Daily Beast):
http://www.thedailybeast.com/articles/2012/10/09/pakistan-the-schoolgirl-the-taliban-tried-to-kill.html
Pakistan’s army is in the mood for a change (FT, Ahmed Rashid):
http://blogs.ft.com/the-a-list/2012/08/15/pakistan-army-is-in-the-mood-for-a-change-of-tack/#axzz28vFUsTZD
Pakistan rebuilds its education network after Taliban are driven out of Swat (The Guardian):
http://www.guardian.co.uk/global-development/2012/jun/26/pakistan-education-swat-valley-taliban
State of Education in Pakistan (Pakistan Today):
http://www.pakistantoday.com.pk/2012/04/28/comment/editors-mail/lack-of-education-is-adversely-affecting-girls/
Why Gender Equality in Basic Education in Pakistan? (UNESCO):
http://unesco.org.pk/education/documents/publications/Why%20Gender%20Equality%20in%20Basic%20Education%20in%20Pakistan.pdf