The Church of England has written to parishes warning them that conserves should not be sold in jars that have been previously used because of new food-hygiene regulations.

“You can re-use jam jars at home, and you can use them for private gifts to friends; what you are not allowed to do is to make jam, put it in re-used jam jars, then either sell it or even give it away at a public event,” warned the circular from the Churches’ Legislation Advisory Service.

Canon Michael Tristram, of Portsmouth Cathedral, said: “On realising that this was not a belated April Fool’s joke, I was very anxious, not only from the fund-raising point of view for all our churches, but, also, because it goes against the green agenda of recycling.”

It's a war against religion!

This example of political correctness gone mad is more proof that the militant atheist agenda is out to destroy Christianity in England and throughout the world.

Anybody who works for the Food Standards Agency and anyone who supports their satanic policies should be excluded from taking communion forthwith. 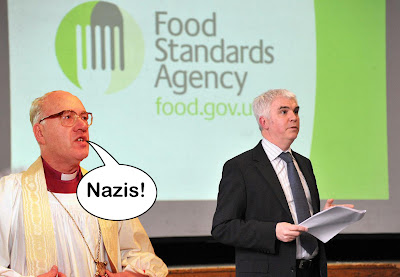