At his instillation as the new Vatican enforcer in San Francisco (Anglican bishops not welcome), Salvatore Cordileone joked about his recent arrest for drink driving.

From THE SAN FRANCISCO EXAMINER:

Archbishop Salvatore Joseph Cordileone, wearing gold and red robes with a matching miter, told an audience of more than 2,000 invited guests at his installation mass that he was grateful for the messages of support he had received from people of different religious and political viewpoints following the Aug. 25 arrest in his home town of San Diego.

“I know in my life God has always had a way of putting me in my place. I would say, though, that in the latest episode of my life God has outdone himself,” Cordileone said with a chuckle as he delivered his first homily as archbishop.

Oh, that God! He has such a wicked sense of humour. 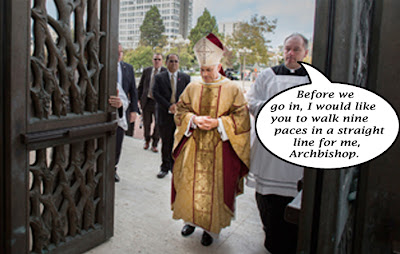