The current ban was announced after Patriarch Irinej, the head of Serbia's Christian Orthodox church, urged the government to prevent Saturday's march. He said in a statement that such a "parade of shame" would cast a "moral shadow" on Serbia.

Serbia is seeking membership of the European Union. In fact, in March, after promising to be good and not to go around massacring people who are not like them anymore, they were given official candidate status. I hope that our Mr Cameron and other heads of EU states where they don't allow unelected churchmen to run their police forces, will now veto any further attempt by Serbia to join our little democratic club. They should remain outside the E.U. along with that other homophobic, tyrannical European State that completely ignores international human rights legislation, the Vatican. 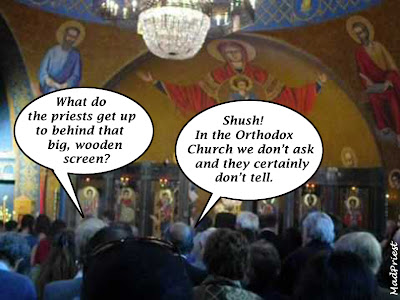