Archbishop of Canterbury Rowan Williams compared Occupy protesters outside St Paul's Cathedral to hapless TV priest, Father Ted. Speaking at an event hosted by think-tank Theos, Williams said anti-capitalist demonstrators lacked clarity of purpose. He called their message about capitalism in crisis "so general as to be undemanding".

"Rather like that episode in Father Ted where the priests demonstrate outside the cinema with a placard saying 'Down With This Sort of Thing'," said Archbishop Williams.

Well, yes, maybe. But at least they did something. They didn't sit around in little groups behind closed doors for ten years discussing what they might do and then give up the idea of doing anything the moment somebody with a loud voice threatened to throw a sulky fit. 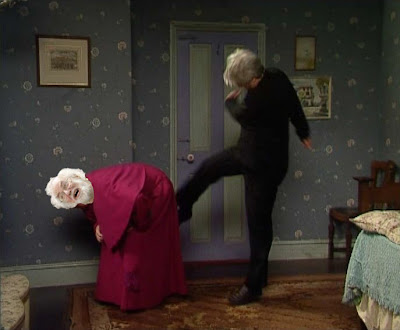