The "Piss Christ" photograph by Andres Serrano that is going on view at a Midtown gallery tomorrow has really been bothering Catholic League president Bill Donohue.

He told Fox News last week, "It seems like we have a protected class for Muslims as well as some other segments of our population. But when it comes to Christians, it's an all-out war." 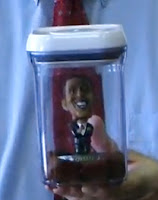 So now Donohue has created a video showing off his answer: An Obama bobblehead in a jar with feces.

Joe. My. God. noticed the video on YouTube and left a comment on the video's page, but then the Catholic League disabled comments. The comment was, "That's a pretty sweet office ya got there, Bill. How many old ladies are eating cat food this week so you could grab their Social Security checks?"

There are four things that really piss me off about this.

1. It is such a boringly predictable thing to do. It's like to shouting "same to you with knobs on," in the school playground.

2. He didn't use real shit. It's a fake just like its creator.

3. WTF has it got to do with poor Barack? I wouldn't be surprised if Donahue blames his gross, little old ladies eating cat food enabled, obesity on Obama as he seems to blame him for everything else.

4. You don't spell "faeces" f-e-c-e-s!!!!! And if you really insist on doing so then don't pronounce it "feecees" because you ain't spelling it that way.