Legalizing same-sex marriage is “a conservative proposal” consistent with basic Christian teaching and the Christian life, Greg Rickel, who has served since 2007 as bishop of the Episcopal Diocese of Olympia, argues in a statement to be released on Thursday. The bishop’s statement will be read during an afternoon news conference, at St. Paul’s Episcopal Church, at which Protestant and Jewish leaders from the faith community — and Catholics for Marriage Equality — will argue for passage of Referendum 74 on the November ballot. 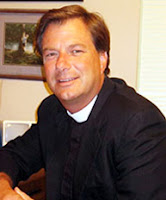 Bishop Rickel writes, “Christianity has held, when considering relationships of all sorts — but especially in relation to two people in marriage — fidelity to be our value. Fidelity is the value in most all our sacraments, and also in our life as Christians. It seems to me we have held our gay and lesbian brothers and sisters in a Catch-22. We say they cannot live up to our value because they cannot be married, or even blessed in their union. While many of them have begged for this, it is still not possible. If one would think about this carefully, it would be clear what they ask of us, the church and their government, is to put boundaries around their relationship, to hold them in the same regard and with the same respect, which would also mean that we expect the same from them, as any loving heterosexual couple. They are not asking for special treatment. They are asking for equal treatment. They are asking to be accountable, as a couple, in community. To me, this is a conservative proposal. I am for it, and I hope we will finally make way for this to happen, not only in our society, but also in our church.”

I have been saying for years that the Christian Church was responsible for the deaths of many gay people who died at the height of the AIDS epidemic. Marriage is the right thing to do, not because of tradition, natural law or because God is a homophobe, but because it is the safest way for people to have sex together. Monogamous marriage is good for the body and mind whilst promiscuity is extremely dangerous physically and can lead to all sorts of emotional turmoil and mental health problems. By refusing to allow same gender couples to marry in church and make a commitment to fidelity before God; by labelling their love for each other as anti-social and sinful; the Church expelled gay people into an anything goes wilderness.

Christians who are in favour of the sacrament of (church) marriage being available to all faithful (to each other and to God) couples are often accused of being laissez-faire about morality. What rot! We are, in fact, far more moralistic, and conservatively moralistic, than any reactionary, so-called traditionalist or orthodox Christian. We are the ones who hold to the fundamentals of the Christian faith which were taught by Christ himself, as Bishop Rickel proves so well in his statement. It is those who bind themselves to the human law and human tradition based on the human centred, authoritarian and capitalist paradigms of the Reformation and Counter-Reformation (fifteen hundred odd years after the birth of Christ) who are the revisionists. Furthermore, claims that "it has always been this way" or "it is written in the Bible" are not moral arguments, they are just thoughtless repetitions of enslaving ideas their proponents have had indoctrinated into them in the past by powerful people pursuing their own selfish, power grabbing agendas. Being a Christian moralist is not about following a strict, unchangeable set of rules (that's just doing as you are told). Being a Christian moralist is about thinking about morality and attempting to come to sensible conclusions about how humans should behave based on reason and the reasonable teachings of our free thinking Saviour.