Even by Roman Catholic bishop standards this incredibly contradictory statement warrants a special Screwtape award. In the same sentence the Vatican's man in New Jersey calls for religious freedom and then states that anybody who doesn't do exactly as he tells them to do will be excommunicated. On top of that he has the bare faced cheek to claim that he's not telling people who to vote for.

Newark Archbishop John Myers released a pastoral statement Tuesday that calls on Catholics to examine how political candidates stand on abortion and “a proper backing of marriage.” In the letter, Myers said traditional marriage and religious freedom is under attack and that Catholics who support same-sex marriage should refrain from receiving Holy Communion.

Myers insists his statement is not intended as an endorsement for either political party and is not telling parishioners whom to vote for.

In his pastoral (sic) statement, Myers keeps banging on about how same gender marriage is not natural. He insists that is natural for a man and a woman to get married and do the wild thing together. I suppose it is. In fact, it definitely is. At least, the doing the wild thing definitely is. It's so natural that anybody who chooses not to when they are perfectly capable of it must be regarded, if you're into this what's natural and what isn't nonsense (which I'm not) as acting completely unnaturally. In fact they would be acting in a far more unnatural way than two people of the same sex doing the wild thing together as, at least, they are following their natural inclinations as opposed to denying them. Therefore,  using Myer's logic, celibacy is about the most unnatural manner of life a person could choose to follow, which would make this allegedly celibate archbishop a major blasphemer and heretic. Not only does he insist on following an unnatural lifestyle himself but he also uses his position of authority to insist that other people turn their backs on the natural order. 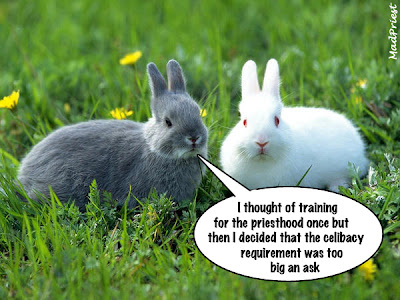