A leading ultra-Orthodox haredi rabbi has exhorted his followers in Israel to burn their iPhones, and even forbade the sale of such devices to non-Jews. Rabbi Haim Kanievsky, who is one of the most influential figures among the havedi community, issued a public notice saying that anyone who owns the smartphone should set it ablaze.

On September 12, Rabbi Lior Glazer presided over a ritual iPhone-smashing ceremony. Another organisation, Eda Haredit, has banned the use of such devices, along with Android-run smartphones and BlackBerrys, because of the "spiritual holocaust" they represent.

UPDATE: Following the iPhone burning an angry crowd of young American stock-brokers, advertising executives and computer nerds, carrying placards and shouting, "Blasphemy!", broke into the compound of the Israeli embassy in Washington D.C. and said some very rude things to the ambassador. A senior US senator has offered a reward of $100000 to anyone who flans Rabbi Lior Glazer with a custard pie in public.

In an interview with OCICBW... the senator stated, "I know it's wrong to throw custard pies at orthodox rabbis, because it gets all stuck in their beards and makes them look even sillier, but this is the only way to stop the Anti-Appleists pursuing their evil, hate campaigns against the American way of life." 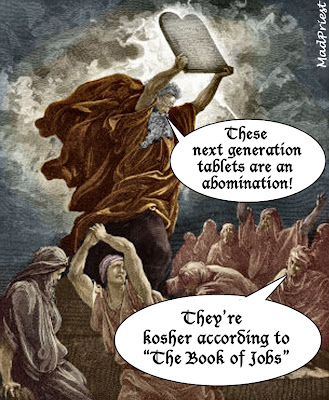