A female vicar who hit the headlines when she compared the Church of England to an abusive husband has now called on the institution to stop being so boring. The Rev Dr Miranda Threlfall-Holmes hit the headlines recently when she branded the church an “abusive institution” after last-minute changes to plans allowing women to be bishops.

She said: “I think it is important to answer the questions people are asking now and not those they were asking 400 years ago. There is a danger that we retreat into a historical golden age. We need to acknowledge that society has changed. The church needs to be challenging. It needs to be exciting for people. We need to enthuse people about the idea of Jesus so that it’s not a case of why don’t they believe but rather how can they not? I want to have people talking about what the church does, to have people talking about God, whether or not they come to church services. We need to accept that Church has sometimes been boring for some people. So there are two things we have to do. First, we need to make sure everything we do as a church is really high quality, and secondly we mustn’t wait for people to come to us, but go out to where people are, whether it be schools, the local play park or the shopping areas.” 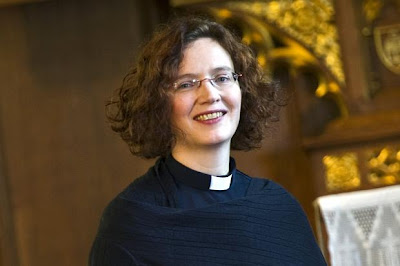 Miranda has been riding high on the OCICBW... Babelicious Bishop chart for a while now. The Babelicious Bishops Competition was launched seven years ago on this blog to encourage not bad looking women priests to put themselves forward for episcopal preferment in a bid to persuade "traditionalist" male members of the Church of England and "unmarried," elderly female "traditionalists" to change their mind about voting against women bishops. It has been a major success and has led to the physical appearance of our clergy becoming an important consideration in the Church's selection processes at all ministerial levels. No longer can women priests get away with not bothering to put a bit of slap on before Church on Sunday or wearing baggy jumpers that hide the curvaceous bodies God so graciously gave them so that men had something to get up for every morning. The campaign also raised serious theological questions that had been ignored by the Church for centuries, such as, "Would Jesus have gone through with marrying Mary Magdalene if she had worn a shapeless, lilac blouse over black slacks and sensible shoes on their first date?"

I have to admit that I have an interest in the eventual rise of this feisty, young, Godbothering bit of eye candy to the episcopacy. She is a friend of mine. We were both curates at the same church under the same vicar. We respect each other and actually get on quite well, even though she has a bit too much enthusiasm for families and children for my liking. 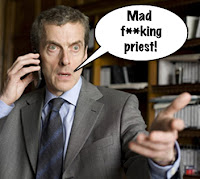 Therefore, she is my best hope of getting my job back. I'm pretty much counting on her becoming one of the first female bishops in England and making me her chaplain. I sort of see myself as a diocesan equivalent of that spin doctor who swears a lot in "The Thick Of It." I think I would be very good at making her enemies "disappear" and getting the dirt on anybody who might cause problems for her. It could very well be my true vocation in life.

Anyway, she's got a book coming out soon entitled "The Essential History of Christianity." It sounds a bit boring if you ask me. If I had been her agent I would have insisted she wrote something a lot more spicy, with a hot, young female bishop as the lead character. She could have called it "Fifty Shades of Purple." We'd have made a fortune.

Even so, you all better buy the book when it comes out. If I am to eventually become the real power behind the first women to be archbishop of Canterbury I better keep on her good side.