Poachers are escalating their assault on Africa's elephants and rhinos, and conservationists warn that the animals cannot survive Asia's high-dollar demand for ivory tusks and rhino horn powder. Seeing a dire situation grow worse, the animal conservation group WWF is enlisting religious leaders to take up the cause in the hopes that religion can help save some of the world's most majestic animals.

Dekila Chungyalpa, the director of WWF's Sacred Earth program, argues that the killing of elephants, rhinos and Asian tigers — the three animals WWF is most concerned about — is a moral issue. She said that conservationists are not doing well enough getting the anti-poaching message across, and that new strategies must be tried.

"Faith leaders are the heart and backbone of local communities. They guide and direct the way we think, behave and live our lives," she said, adding later: "I think this is the missing piece in conservation strategies. ... WWF can yell as much as we want and no one will listen to us, but a religious leader can say 'This is not a part of our values. This is immoral.'"

Three dozen religious leaders from nine African countries toured Nairobi National Park on Thursday, where they saw rhinos, zebras, buffalo and ostriches all within site of the skyline of Kenya's capital city. 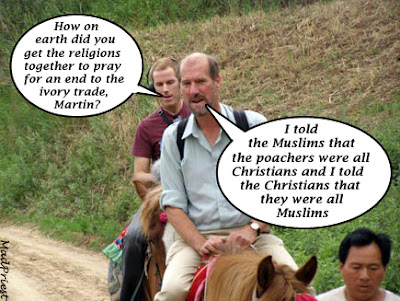