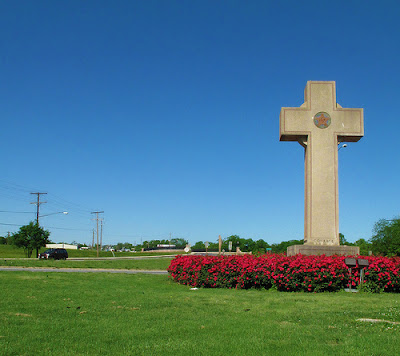 The World War I Memorial Peace Cross in Prince George's County has stood for nearly 90 years. But an organization is asking that the cross be taken down.

The American Humanist Association, a humanist and atheist advocacy group based in Washington, D.C., filed a complaint last month saying that the cross is an unconstitutional use of a religious symbol on public land.

The "New Atheists" are often accused of being fundamentalists. The cap most certainly fits. This monument has been standing since 1925. As such, it is a piece of history as well as being architecturally iconic and culturally important. To demand that it is torn down is no different, in my opinion, to the destruction of the two giant Buddhas of Bamiyan (Afghanistan) at the hands of the Taliban back in 2001.

The question is where do you draw the line? I live in a mainly secular country which is filled with religious architecture. Our cathedrals and churches are visited by millions of people every year, the vast majority of whom are atheists or adherents of non-Christian religions. The iconoclastic thinking of new atheism does not allow the possibility that non religious people can be interested in cultural heritage, which is very patronising and most definitely not humanist. What about Stone Henge? Heck it's on public property. If it was in the USA the government would probably be forced to tear it down.

And what are these atheists scared of? To a non-believer this cross is just a lump of rock. Are they frightened it might fall on them? Or do they have such a low opinion of their fellow citizens that they believe a war memorial in the shape of a cross will turn their children into creationists and mosque bombers?

There are valid reasons for American atheists to campaign against the erection of new religious symbols on public land. But the tearing down of those religious monuments that are already there is just cultural vandalism and the wanton destruction of the historical record. It is also very silly and very petty.

Honestly, these fundi-atheists are nothing more than godless puritans.