Steve Gustafson, a 66-year-old retired corporate lawyer in Florida jumped on top of a 7-foot alligator all in an attempt to save his "best friend," a small terrier dog named Bounce.

"I just knew that my best friend was going to be dead," he told the Orlando Sentinel. "And I took off."

The grandfather was hanging out in his backyard while the 9-year-old West Highland terrier wandered close to the shore of a nearby pond. That's when Gustafson said he heard Bounce yelp and saw the alligator carrying his dog away in its mouth.

"For whatever reason, I don't know, I just yelled, 'you're not going to get her!' and just leaped on the gator," Gustafson said.

But the rescue didn't come without a fight. The 130-pound gator reportedly tried to pin Gustafson to the bottom of the 3-foot-deep pond before he was able to outmaneuver it, finally setting Bounce free. Both Bounce and Gustafson sustained minor injuries, receiving medical attention and a few stitches.

His neighbors responded by giving Gustafson a superhero cape and alligator belt buckle. Still, they both came out far ahead of the unlucky gator, who was captured and killed by a local trapper.

For the first time ever, a lawyer becomes OCICBW...'s

The trapper on the other hand is hereby consigned to that infernal swamp where giant gators will snap at his heels for eternity. And that would be too good for him. 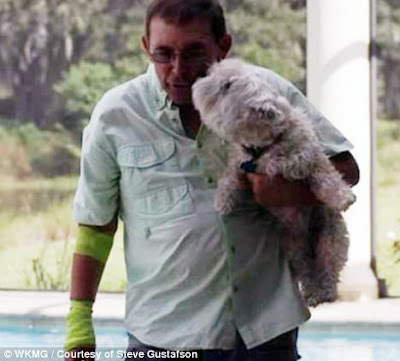