In England, CHURCHADS.NET (previously know as the Churches Advertising Network) has released details of its Christmas campaign for 2012. This is, of course, a waste of time and money as we are all going to die on the 21st. December, according to a programme I watched on TV last week.

As usual the creative, holy trouble makers are going for a shock/horror response from the media, which is about the only way you can get God into the public consciousness nowadays. I understand there will be various takes on the them, but this is the leading ad: 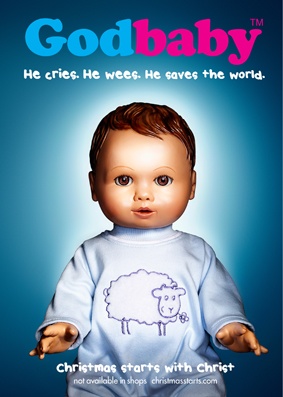 The striking image of a fictional "Godbaby toy" aims to make the Christmas story appeal to the younger generation and puts Christ at the centre of conversations. The doll represents the baby Jesus and plays on the idea of Christmas being a time when everyone is searching for that 'must-have' Christmas gift. This obsession means we focus too much on the material nature of the festival and miss the point – that Jesus, the true Godbaby, was born human and must never be turned into a commodity.

The Church of England's official trendy bishop, Nick Baines, has given the image an enthusiastic thumbs up.

He says: "It's another strong and arresting image. It will surprise some and disturb others. Which is exactly what the real Jesus did. And it forces us beyond the tinsel to the human reality of 'God among us'."

Personally, I think it's very good. It's certainly a lot less worrying than another toy campaign that I have just been advised of by Amazon. Just when you thought it was safe to go back in the toyshop...

Thanks to Adrian Worsfold for sending me this story. You can read his take on the campaign on his blog, THE PLURALIST SPEAKS.