Sergei Baranov keeps his clerical robes hanging neatly in his closet, but he believes he will never again be allowed to wear them inside a Russian Orthodox Church. Baranov, who had led a quiet life as a deacon in the small city of Tambov, became an Internet celebrity last month when he asked to be defrocked in an open letter to the Moscow patriarchate, saying he was outraged by the church's stance against three members of the punk band Pussy Riot.

Baranov told the Associated Press on Tuesday that he supports the band's stunt and does not regret his resignation.

"Everyone prays as they can," Baranov said of the Pussy Riot members. "And with their act they exposed the ills and blisters of society. We should have done that a long time ago."

Sergei Baranov goes straight to the number one spot on our...

... chart. And if Hollywood ever decides to remake "Dr. Zhivago" I strongly suggest they offer this man a screen test for the lead role. 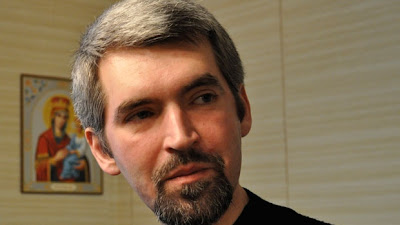