Today is the feast day of Northumbria born saint, Ench the Jester, who was not a professional court fool, but the abbot of Bede's World Monastery in Jarrow, South Tyneside, between 625AD and 626AD. Nothing is known of his early life although the Venerable Bede claims in his book, "A Short History of Tyne" that Ench was born in the unfortunately named hamlet of Bog Houses, near Cramlington (now in the county of Northumberland).

Ench is the patron saint of jesters (more recently, comedians) and also sewerage workers. He was given his patronage of jesters because he was the first priest in the Anglican Church to start every sermon with a joke. Only one of his jokes survives and it is not a very good one.

Obviously humour has evolved quite a lot since the Seventh Century.

His patronage of sewerage workers is connected to his blessed martyrdom. Ench had been a guest of the King of Northumbria at the Fishy Dishy Day celebrations at Bamburgh Castle on the nineteenth of June, 626AD. He had, as usual, been the life and soul of the party and he was in a very jovial mood when he left the castle to ride back south to Jarrow. It was a very hot day.

As he made his way through the town of Amble he came across a group of men emptying the municipal cesspit. They were up to their thighs in excrement and sweating profusely. As he passed, Ench cried out to the men, "That's a really shitty job you're doing!"

Unfortunately for Ench, this was the twenty third time that day that the labourers had heard this remark and, no doubt made even more grouchy than usual by the high temperature, they grabbed the abbot, pulled him from his pony and then threw him into the cesspit, into which he sank and drowned.

In iconography, Ench is always portrayed holding a shovel in his right hand, a banana skin in his left hand and with a clothes peg on his nose. I possess a very good, and rather expensive, icon of Saint Ench which I purchased recently from the Gay Cossack Icon Emporium, Bishops Gossip, Norfolk, NO2 KID. 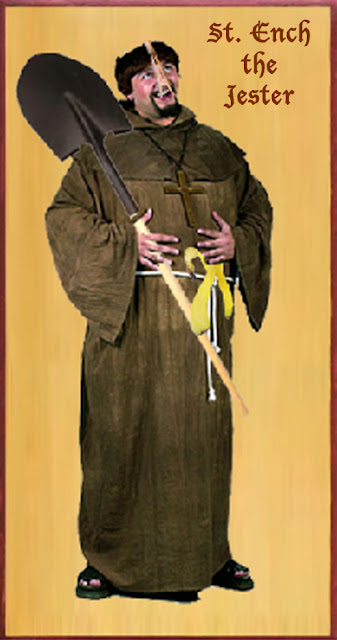 * Discovered by Professor MadPriest, of the Newcastle College of Invented History, on a piece of parchment slipped inside a copy of the November, 1991, edition of "Viz Comic."