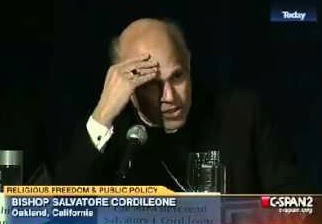 The Roman Catholic archbishop-elect of San Francisco, Salvatore Cordileone, controversial for his vigorous support of California's same-sex marriage ban, was arrested on suspicion of driving under the influence and ordered to appear in court, San Diego authorities said Monday. Cordileone was booked into San Diego County jail two hours after being stopped and was released Saturday on a $2,500 bond, sheriff's records show. He was ordered to appear in court Oct. 9.

In a statement released by Cordileone he stated, "I pray that God, in His inscrutable wisdom, will bring some good out of this."

I am sure we are all incredibly shocked by this report. If it is true it would make this papal golden boy a Class A hypocrite and a far greater danger to society than any tinkering with the definition of marriage could ever be. I mean, same gender marriage is not responsible for the maiming and killing of hundreds of thousands of people, many of them just children, every year, whilst drink driving is.

Furthermore, according to the Bible, gay sex is a minor matter, only worthy of two or three mentions in the whole of it's lengthy text. But getting drunk is condemned over and over again in both Testaments and there are numerous stories recorded about the dangers of excessive drinking.

Basically, Cordileone has been seduced into indulging in the sins of the flesh. As the Roman Catholic Church is primarily concerned with condemning the sins of the flesh, I cannot see how this drunk priest can now head up the San Franciscan branch of the war against gays without showing his church up as a major practitioner of hypocrisy. And that would never do. 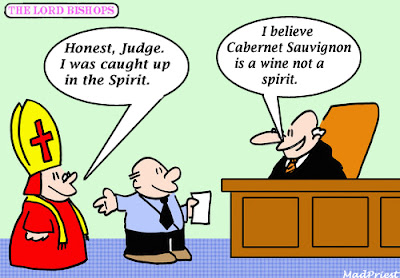 Big thanks to Alison for sending me this news report.