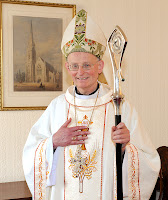 As Scotland prepares to become the first country in the United Kingdom to legalise same-sex marriage by 2015, a Catholic bishop has suggested that changing the traditional definition of marriage could open up the gates to bigamy and incest.

"If we really want equality, why does that equality not extend to nieces who genuinely, truly love their uncles?" asked Bishop Hugh Gilbert of Aberdeen.

Either Gilbert has the reasoning capacity of a brain damaged mollusc or he is deliberately saying things that he knows are not true in order to scare the intellectually challenged into adopting the same hateful, unthinking attitude towards gay people as himself and his employers. I expect it is the latter as the alternative would mean that The Vatican Catholic Church really is scraping the bottom of the barrel when choosing its enforcers nowadays.

It is true that the passing of some laws make it easier for further laws to be passed. For example, if the UK Parliament was to pass a law making the sale of cannabis legal then it would be more likely that they would pass a law legalising the sale of heroin at a later date. But this is because many of the reasons for legalising cannabis and legalising heroin are the same and many of the people campaigning for legalising of cannabis would also campaign for the legalising of heroin. But this is not so in other, on first glance, similar situations. For example if the UK Parliament passes a law (as it often considers doing) raising the speed limit on motorways it would not, in the slightest bit, make the raising of the speed limit in built up areas any more likely. In fact, quite the opposite would be true. As the increasing of the speed limit on the motorway would be based on safety factors it is more likely that, in the future, Parliament would lower the speed limit in built up areas, also for safety reasons.

One of the main reasons why same gender couples want to be allowed to legally marry is that they want to be subject to the same laws as straight couples in all ways. At the moment the refusal to allow gay people to be part of the moral consensus of society means that gay people are more likely to engage  in hedonistic behaviour. I mean, if you are hated for loving people you might as well be hated for doing anything that takes your fancy because the bigots can hardly hate you anymore. Basically, if same gender marriage is not allowed, on the basis that it is morally wrong, then a gay man might as well enjoy "polygamous" relationships or, even, incestuous ones. But if same gender marriage is by law given the same moral value as opposite gender marriage then gay people will not have the excuse of being excluded from the mores of society and a gay person who continues to have many sexual partners concurrently only has him or herself to blame if society regards them as morally deviant.

Opposite gender married couples are not demanding the legalising of incest and polygamy just because they are allowed to marry. Same gender married couples will not do so either. The legalising of same gender marriage has taken many years of concerted effort by millions of people to get on the table. There are just not that many uncles, who want to marry their nieces, in the world for them to be able to pursue such a campaign. Furthermore, polygamous, incestuous uncles do not have the friends that gay people have, who are prepared to fervently campaign with them.

Bishop Hugh Gilbert of Aberdeen is a scaremonger. That he is scaremongering in the name of Jesus Christ makes him more morally deviant than the most vile pervert his genophobic denomination could ever come up with.