You cannot learn to be a pastor, someone who is involved in the pastoral work of the Church, who is concerned with both the spiritual and physical welfare of her or his "flock." You have to be a person who wants to stop the hurting and make people happy without regard for rules, regulations and "the way we have always done things." You have to be prepared to help people no matter what affect doing so might have on your own future. You have to want to bring comfort so much that you do not want to move to a more prestigious post that would restrict your opportunity for pursuing your calling. You rarely find a person in the higher positions of the Church who has the charism of pastorship.

There are many charisms. The pastoral calling is only one of many. It is no better or worse than any other. It's just what you have to do. However, the fact that the charism of administration is so highly regarded in the Church is problematical. The gifts of the powerful tend to usurp the gifts of the less powerful and become the shot-calling gifts. If an administrator comes to believe that his or her task is more important in the Church than the tasks of the pastor then people get hurt. This is because administrators place expediency and what they perceive as the common good above the good of the individual.

It may be that a person cannot be both an administrator and a pastor. That is okay as long as they know it within themselves and delegate to others the tasks they are not qualified to deal with effectively. However, this involves publicly accepting that you are not good at something. That's difficult enough in the secular world, but in the Church, where ministers are expected to be able to do everything well and where inability is viewed as a great weakness, it is nigh on impossible. Personally, I think the only way to solve this dilemma is to return to the early Church understanding of the charismatic, as propounded in the epistles of Paul, where each charism is regarded as a calling in itself. For various reasons the modern day Church expects its office holders to be adept in many charisms and in some cases, such as the post of bishop, these expected charisms can be contradictory. Therefore, we need to decide what we want our office holders to provide for us and then choose the people for the job. This would mean giving many of the responsibilities currently invested in certain posts to others in posts we have chosen to be bearers of those responsibilities. For example we may decide that a bishop should primarily be a pastor. In which case we should remove from the post of bishop the responsibility for the, often, contradictory task of administration which, in turn, should become the responsibility of an office holder called because they have the charism of administration.

We could only achieve this sensible rationalisation of the offices of the Church if we take to heart Saint Paul's central message regarding the abilities given to individuals by the Spirit. That is to accept that they are all equal; equally valid, equal in status and equally valued by God and the people of God. 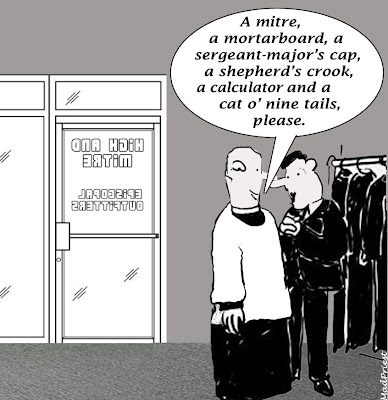