A lot of my American friends are talking about what punishment should be given to James Holmes, the young man who shot at an audience in a Colorado cinema recently, killing twelve people and injuring another fifty-eight. Personally, I do not think he should be punished at all.

The man is mad. To base his punishment on a decision as to whether he knew what he was doing or not is completely wrongheaded. All mad people know what they are doing. You are not some sort of mindless robot when you are mentally ill. James Holmes should be placed in a secure, safe facility (most probably for the rest of his life) and given as pleasant a life as is possible always bearing in mind his own safety and the safety of those caring for him.

I would love to be able to tell you what was going on in his mind when he planned and carried out the massacre of so many innocent people. But, even though I have suffered from madness myself, I cannot. The thoughts inside your head when you are seriously mentally ill, the way your mind feels, are so different to what is regarded as normal that the normal world has never come up with words to describe it. Psychiatrists ask you how you are feeling and use words such as "down" ("on a scale of one to ten") but such terminology is not really applicable to what you are feeling inside. It's a feeling beyond words. I remember being faced with these questions and just thinking, "I don't understand." 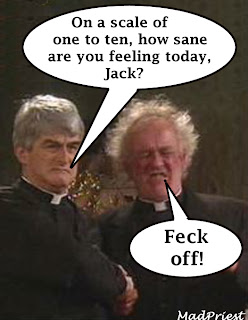 As I said at the beginning of this short post, James Holmes would have been fully aware of what he was doing. He was most likely aware of the fact that what he was doing would be regarded as abnormal, as evil, by everyone else. But that does not make him sane or, in a just world, responsible for his actions. Under our present legal systems he will be judged using concepts understood by sane people who, thank God, have been spared the knowledge of what it is like to be mad. To punish him will, no doubt, give some sort of closure to those affected by the massacre. But as far as James Holmes himself is concerned it would be like beating a dog because it had bitten the postman. The dog would know that you were punishing it and would probably know why you are punishing it, but it wouldn't understand your moral thinking for punishing it. You would have to understand the mind of a dog to understand the actions of a dog and there's as much chance of a human being ever being able to do that as there is of a sane person understanding what goes on in the head of a madman. If you don't believe me, ask my wife.