I have always loved trees. In fact I want to be one. A large one in English parkland. Somewhere there's plenty going on. Preferably with a major folk festival every year. As someone who feels safest when in one place it's quite an attractive proposition.

There's plenty of fine specimens on the Rozelle Estate on the outskirts of Ayr. And lots of grass too on which dogs can run free and have a great time. Our two did just that when we visited the park on Saturday.

I am really proud of the way the British allow dogs to run around in their parks, countryside and beaches. Of course, we do have an anti-dog lobby (there are evil people everywhere) but when they get their way and slam a ban on dogs somewhere we tend to just ignore them. There was a "Dogs Must Be Kept On A Lead" sign at the entrance to our local park when we lived in Newcastle. Stupid waste of time, expense and effort putting it up if you ask me - dogs can't read. 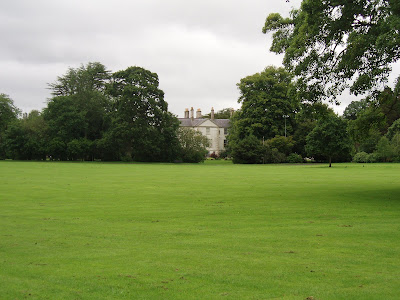 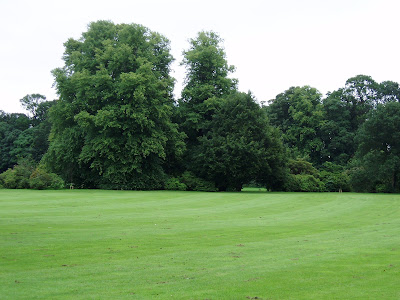 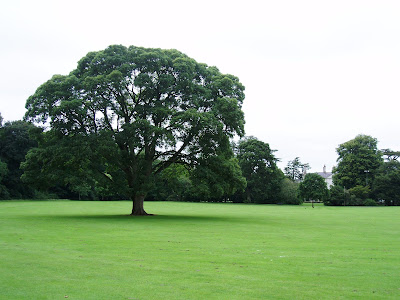 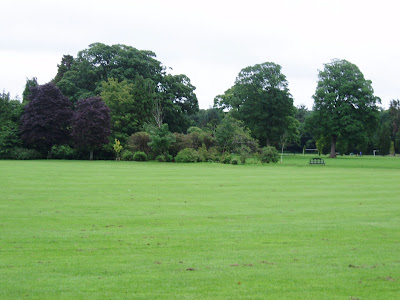 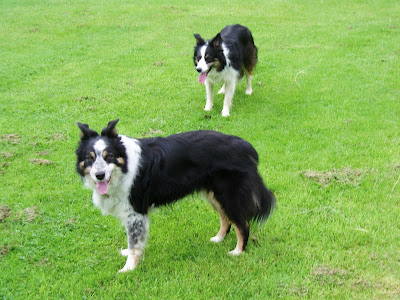 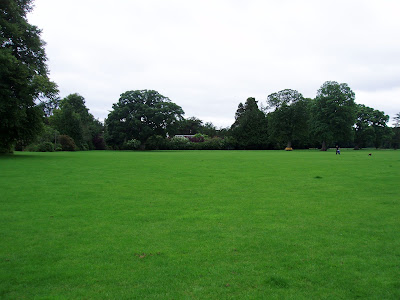 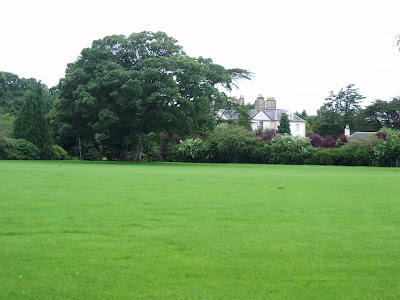 There's also a large pond in the park... 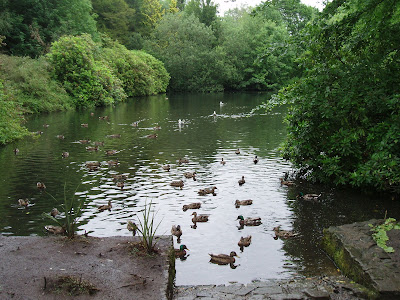 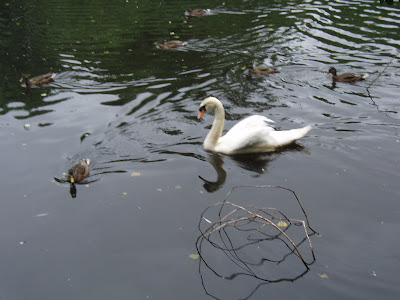 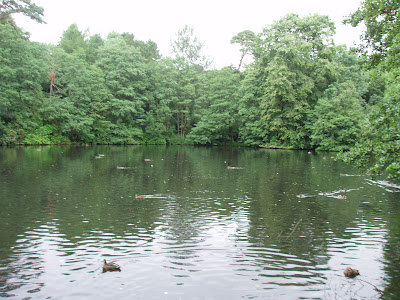 ... and some sculptures that prove beyond doubt my theory that the Scots are descended from Aztecs who sailed over from Central America on the papyrus boats that they originally sailed from Egypt to the Americas on. This explains the Scots' general belligerence and love of human sacrifice. 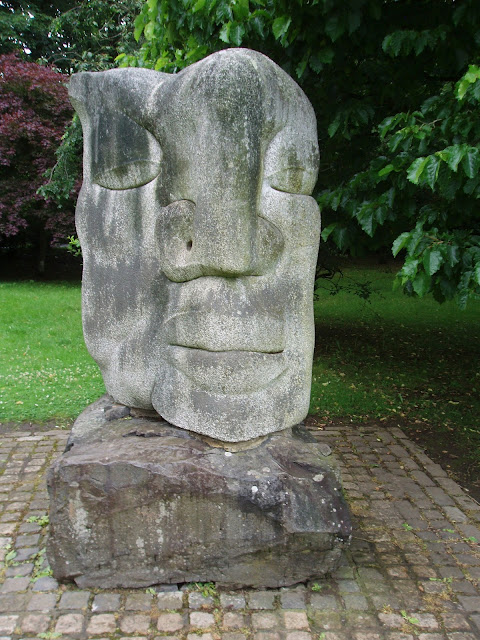 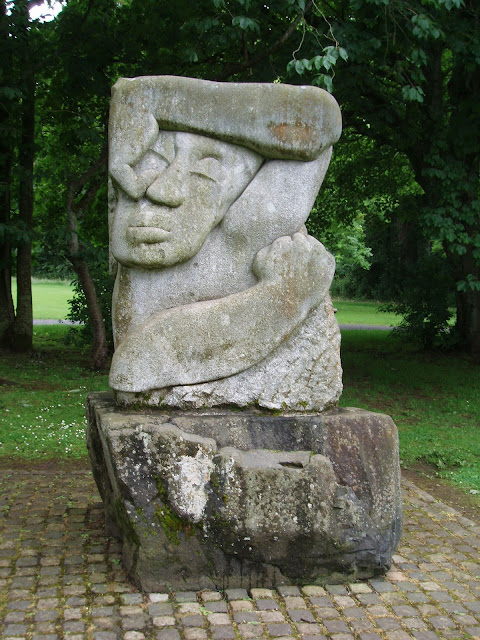 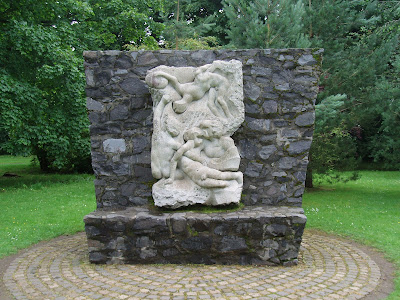 But the highlight of our visit (for us two humans at least) was the Rozelle House Art Gallery. 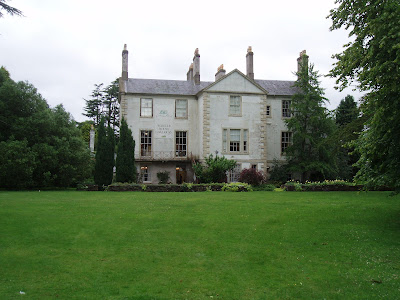 They are currently showing the significant collection, "Tam O' Shanter," a series of 54 paintings, by Alexander Goudie. Considering they can't have very much money to spend on such things (as the museum is not in London where most public money for art, and everything elseHere are three of my favourites. You can see the rest by clicking HERE. 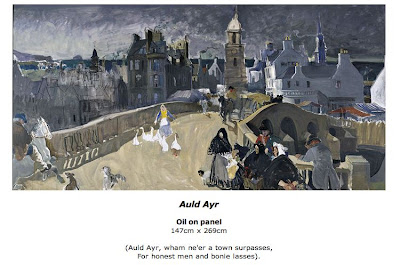 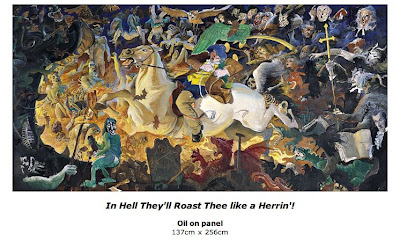 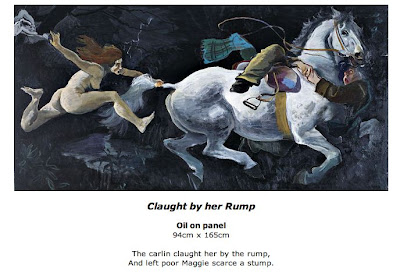 The Estate of Rozelle is a beautiful estate that was gifted to the public in 1968 by Commander J. Hamilton, on the understanding that it be utilised for cultural and recreational pursuits only. The gardens of Rozelle combine mature woodland, rhododendron walks, parkland and ornamental ponds, to produce a rich and varied landscape for all visitors.

Robert Hamilton of Bourtreehill purchased the land on which the Estate is situated at the sale of the Barony lands in 1754. He originally named the Estate after a former property that he owned in Jamaica. The original house was a square Georgian Mansion in the "Adam" style, while the porch and the extension to the rear were built around 1860.

The Maclaurin Galleries are housed in what were the stables and servants quarters. This was only made possible by Mrs. Mary Maclaurin who gifted a sum of money to the town, which permitted the restoration of these buildings and the establishment of the Art Gallery, which was opened in 1976.

The woodland of Rozelle is one of its most important features. The shelterbelt dates back to the time of the purchase of the land in 1754, some of the original Yew, Beech, Sycamore and Horse Chestnut trees can still be seen. Many of the original parkland trees still stand and can be seen on the McDermont plan of 1834; there are also more recent plantings, date around the 1900's - Oak, Acer and Elm. Some of the most interesting trees within the Estate centre around the house and include: - The Ceder of Lebanon which is reputed to have been planted on the completion of the house; the Camperdown Elms, Holm Oak, Cut Leaf Beech and the very impressive Wellingtonia.