Friday started with rain and ended with wind and rain. But we did get a few hours of dryness in the afternoon and were able to get out for a nose around a nearby village and (for the dogs) a walk along a sandy beach.

We started with lunch at Peggy's Tearoom in the village of Kirkoswald.

The village of Kirkoswald is located 4 miles south-west of Maybole. It is well known as the village where Robert Burns attended school with Maybole notable William Niven. It is also here that we find the cottage of Souter Johnnie in which the 18th-century life of a cobbler is presented. Buried in the Kirkoswald churchyard are John Davidson and Douglas Graham, memorialised as Souter Johnnie and Tam o' Shanter in the poem of Robert Burns.

By Scottish standards (see previous posts) it is an attractive village with many points of interest. First among these is the ruin of Saint Oswald's kirk and it's graveyard. 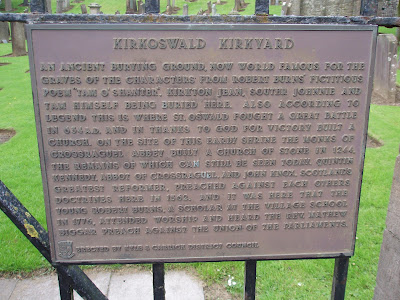 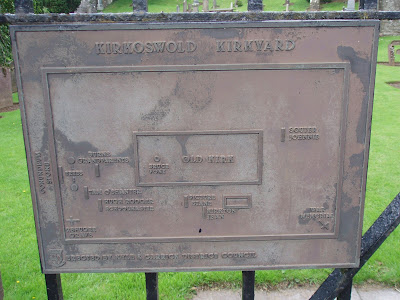 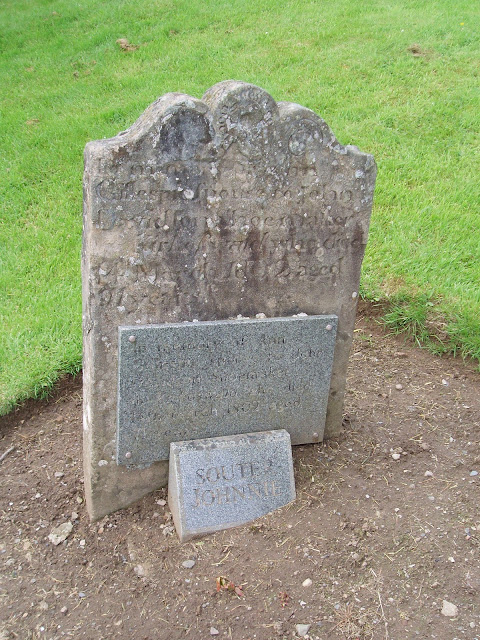 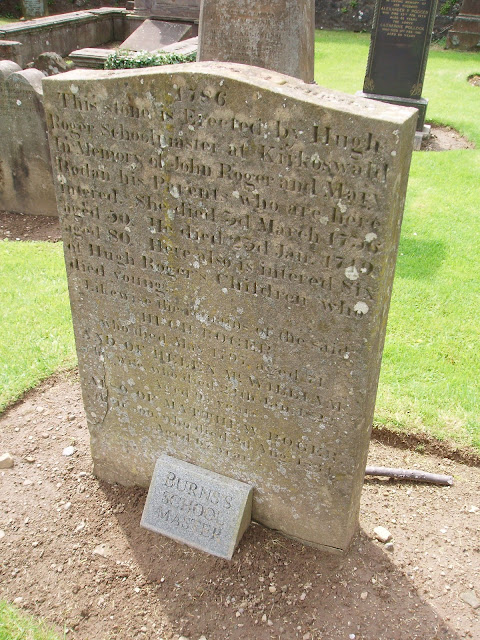 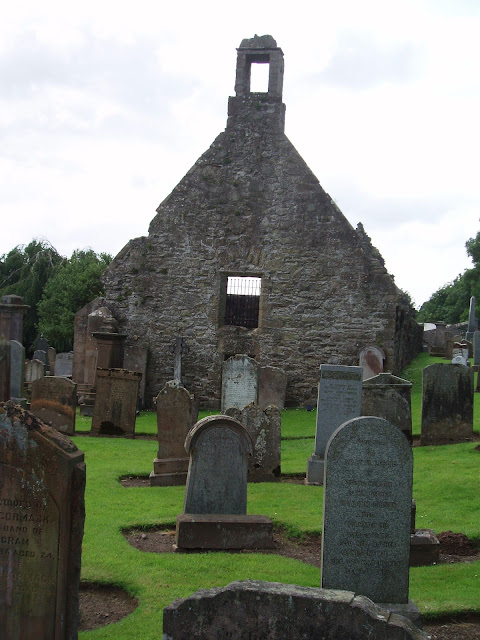 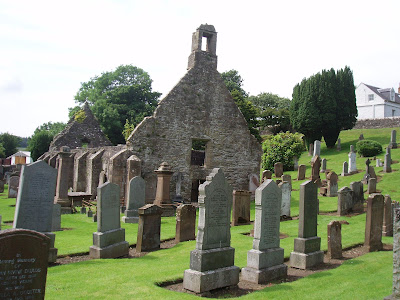 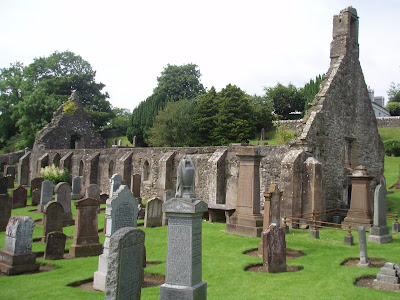 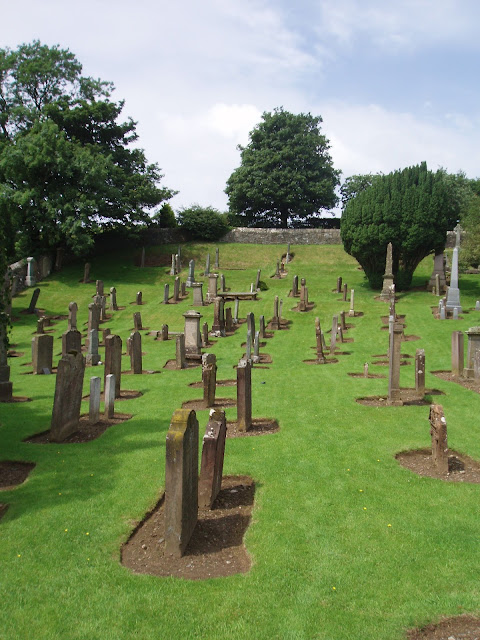 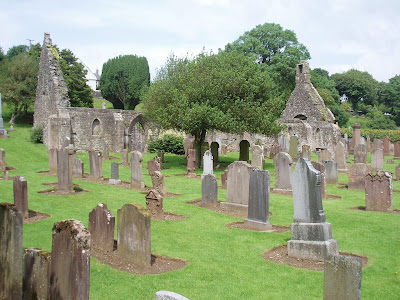 My favourite aspect of the old churchyard are the early graves carved with images of earthly mortality. Very goth. 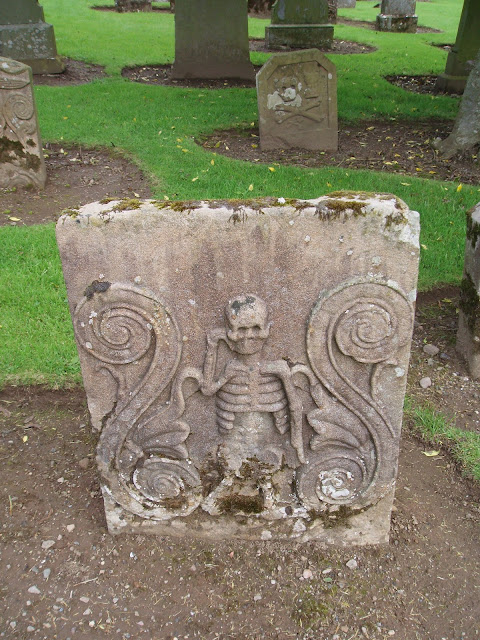 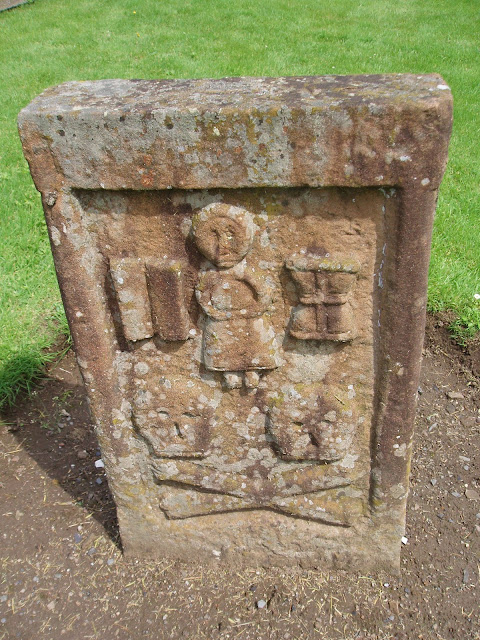 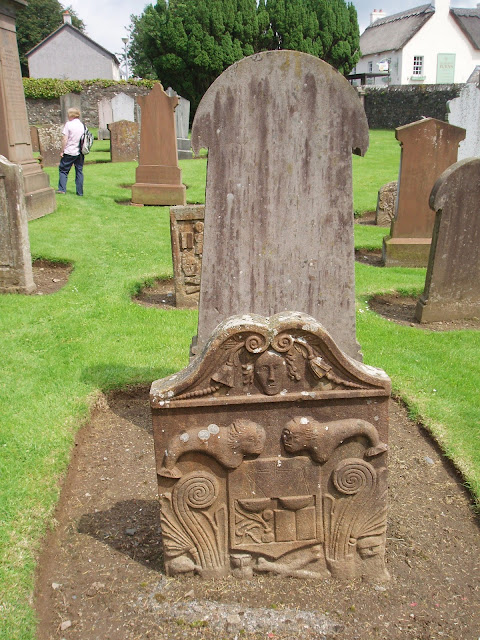 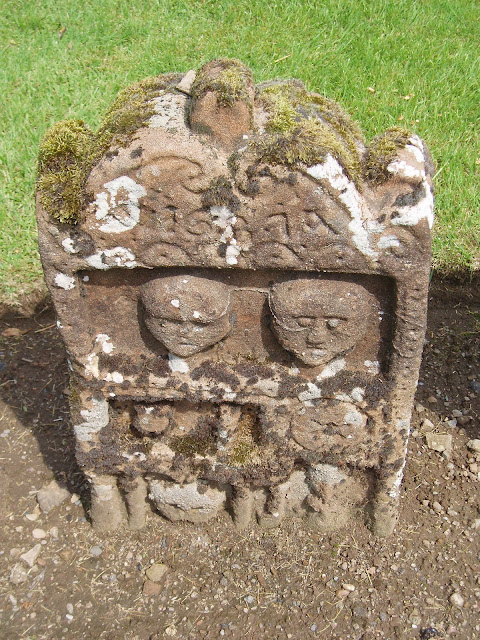 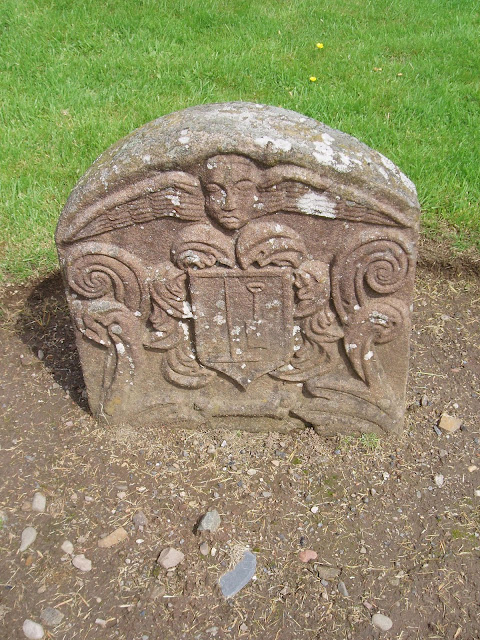 In 1789 Burns was asked to produce a witch tale to accompany a picture of Auld Kirk Alloway in the book Antiquities of Scotland. His response was a poem regarded by many as his masterpiece: Tam o' Shanter. The story was based on an old legend about two Ayrshire farmers who spent too long drinking and on their way home saw witches dancing with the devil in the ruined kirk at Alloway.

The central characters were Tam o' Shanter and Souter Johnnie, readily identified by residents of Kirkoswald as neighbours Douglas Graham and John Davidson. The two were old friends who were well known for socialising enthusiastically in Ayr on market days, often returning home late.

John Davidson was a shoemaker or souter. In 1785 he built a cottage on Main Street in Kirkoswald in which he lived and worked until his death in 1806. Burns probably stayed at the cottage when visiting Kirkoswald in 1786. 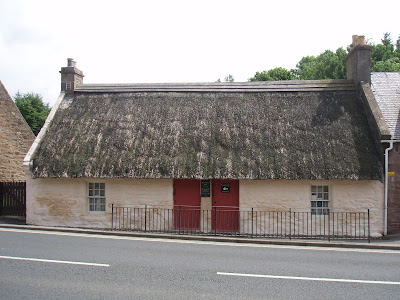 At the moment the centre of the village is scarred by the ruins of Souter Johnny's Inn. A couple of years or so back they removed the slate tiles and thatched the building to make it look more olde worlde and "authentic." Sadly, earlier this year, the thatch caught fire and the following two photos show the damage that resulted from the conflagration. 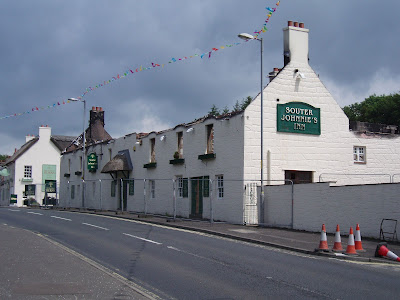 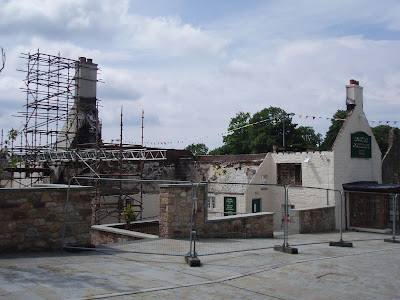 Our next stop was Croy Beach. 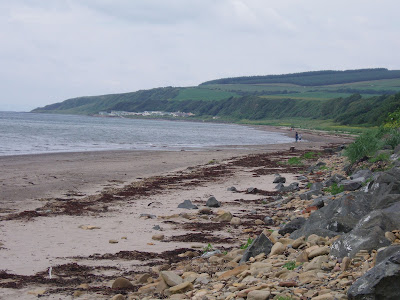 At the southerly tip of the beach you get fine views of Culzean Castle, perched romantically on the very edge of the cliff. We are hoping to spend a whole day at Culzean castle and Country Park so I will put off blogging about it until then. 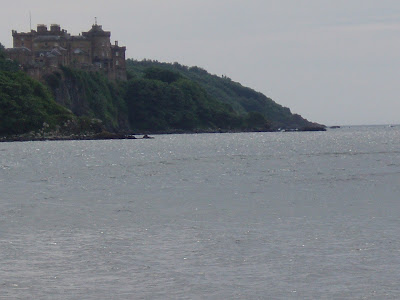 After an invigorating, somewhat windswept, yomp along the beach and back we drove the short distance to the quaint little harbour hamlet of Dunure. There's a coffee shop right next to the haven and we were in need of refreshment. It was 4.30 when we arrived and the cafe, officially, closed at 5.00. But the staff had already put the "closed" sign on the door and were busy cleaning up for the day. So, no luck there.

In my opinion there should be a law against shops not being open during their advertised opening hours. And what is it with British tea shops? They are never open at tea-time! 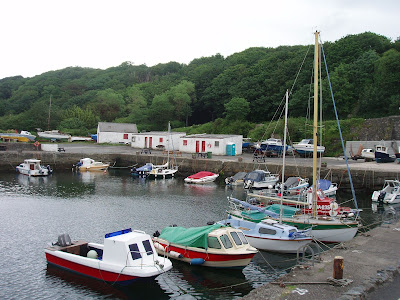 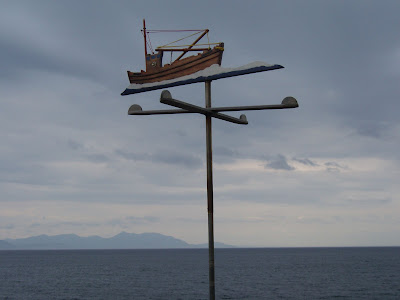 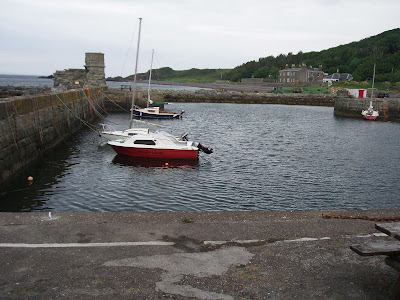 Although it has been a ruin for at least three hundred years, Dunure Castle was once the main fortress of the powerful Kennedy family, the Earls of Cassilis. Today the Kennedys are much more closely associated with Culzean Castle, less than four miles down the coast, but for several centuries from the 1200s, Dunure Castle was by far the more important of the two.

The castle's origins probably date back to at least the 1200s when a stone keep was built on an easily defensible rocky outcrop overlooking the Firth of Clyde. The Kennedy family prospered, with one member marrying a daughter of King Robert III while another went on to become Bishop of St Andrews and the founder of St Salvator's College. As the family prospered, so their castle expanded. New ranges of buildings were added at a lower level slightly inland, and a curtain wall was erected to surround the whole castle. The new buildings included a kitchen range and a chapel, a great hall and a prison, plus living accommodation for the family and their retainers.

Dunure Castle featured as a footnote in history on a number of occasions during its active life. In 1429 a meeting took place here - presumably because it was seen to be neutral territory - between James Campbell, representing King James I of Scotland and John Mor MacDonald, representing the Lord of the Isles. Violence broke out and MacDonald was killed. James I's efforts to contain the outrage of the Lords of the Isles by executing Campbell did not prevent a subsequent uprising by them.

For three days from 4 August 1563, Mary Queen of Scots stayed at Dunure Castle as the guest of Gilbert Kennedy, the 4th Earl of Cassilis. Mary made a number of progressions around her realm during her short reign, and Dunure thus joins a long list of those who would be able to display a "Mary slept here" plaque.

Gilbert Kennedy was not always so hospitable towards his guests. The arrival of the Reformation in Scotland in 1560 led to a huge land-grab, in which secular landowners and lairds tried hard to take control of lands and properties previously held by abbeys across Scotland. Gilbert, 4th Earl of Cassilis, managed to gain control of at least some of the lands of Glenluce Abbey in Galloway, allegedly by paying a monk to forge the necessary signatures on a charter under which abbey lands were passed to him. Gilbert then, also allegedly, had the monk killed by a paid assassin, who in turn he hung on a trumped up charge of theft.

Gilbert Kennedy's efforts to gain control of the lands of nearby Crossraguel Abbey were equally unscrupulous, but caused him more problems. The last Abbot of Crossraguel, who died in 1564, was Quintin Kennedy, Gilbert Kennedy's uncle. He was replaced by a lay commendator (or administrator) called Alan Stewart, who spent much of the next five years fending off assorted attempts by Gilbert, 4th Earl of Cassilis, to take ownership of the abbey lands. Matters came to a head on 29 August 1569 when, according to a complaint later made to the Scottish Privy Council by Alan Stewart, Gilbert had Stewart kidnapped, taken to Dunure Castle, and roasted over an open fire in the castle kitchens until he agreed to sign over the abbey estates to Gilbert. This he apparently did after two turns on the spit. The story then gets rather confused. A distant relative of Gilbert's, Thomas Kennedy of Bargany (who wanted the abbey lands for himself), stormed Dunure Castle and released Alan Stewart. But before Thomas Kennedy could escape he was in turn besieged in the castle keep by a larger force which had arrived under the personal command of Gilbert Kennedy. The ensuing fight between forces occupying different parts of the castle caused considerable damage to its structure. How all this was resolved is a little unclear: but it seems that Gilbert Kennedy was eventually instructed by the Scottish Privy Council to pay Alan Stewart a pension for life in compensation for his treatment: but it also seems that Gilbert may have been allowed to retain the abbey lands signed over to him under duress by Stewart. 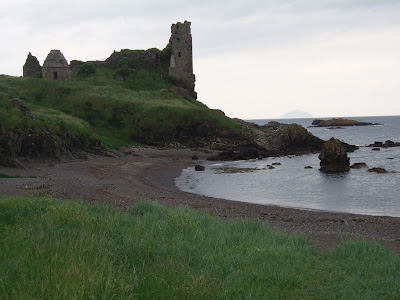 Our final destination of the day was the most exciting of all.

The Electric Brae is a gravity hill in Ayrshire, Scotland where cars appear to be drawn uphill by some mysterious attraction. The Lowland Scots word brae means a hill-slope or brow (with which it is cognate), and the "electric" name was given when electricity was a new technology associated with strange forces. Though the road appears to be running uphill, a suitably free-running vehicle will slowly move off from a standstill. It was widely believed that vehicles were being propelled uphill by a mysterious magnetic force, but the road's apparently uphill slope is an optical illusion. Metal road signs which used to mark the place have tended to be taken by visitors, and have been replaced by a stone which is inscribed with an explanation. 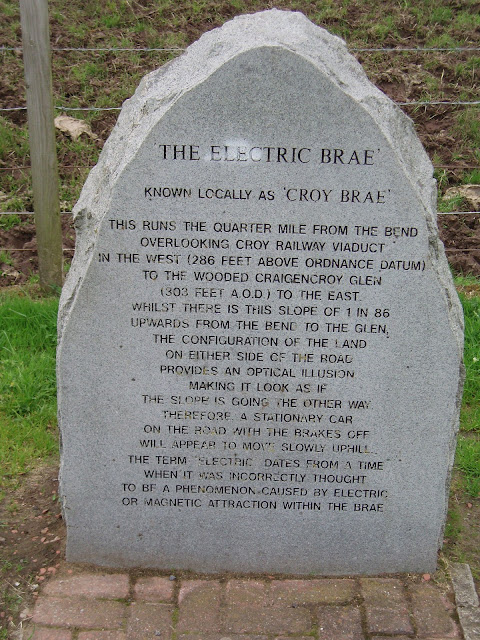 I remember seeing this "optical illusion" on television when I was a kid and I don't think I ever really believed it was as impressive as had been made out. But it is! We parked the car in the lay-by and spent far too much time for people of our age, letting the car roll uphill over and over again. Even Mrs MP, who normally scorns such childish behaviour allowed herself a brief period of immaturity. She particularly liked the weird feeling you get when you walk downhill whilst believing you are walking uphill. 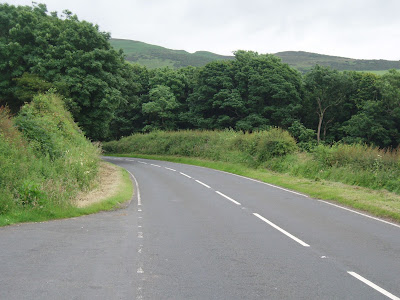 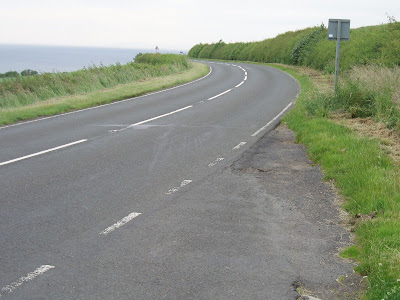 The view across to Ailsa Craig taken from the Electric Brae. 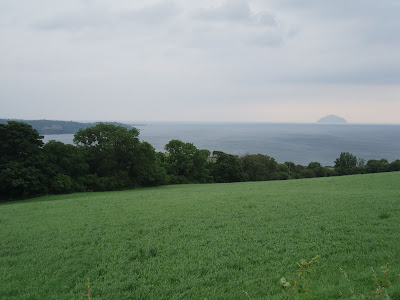