Forgive me for not getting all excited that the new dean of York Minster is a woman. I will get excited when the "wrong type of woman" gets a top job in the Church of England, a woman called Jane Smith rather than Vivienne Faull and whose CV doesn't include private education at a posh school and one of the Oxbridge colleges.

Ordained deaconess in 1982 and priest in 1994, she served first at St Matthew and St James, Mossley Hill and then as Chaplain at Clare College, Cambridge. From 1990 to 2000, she was on the staff at Gloucester Cathedral before moving to Leicester. On 13 May 2000, she was installed as Provost of Leicester Cathedral. Since 2002, when her job title (but not the essential nature of the role) changed, she has been the Dean of Leicester. (WIKIPEDIA) 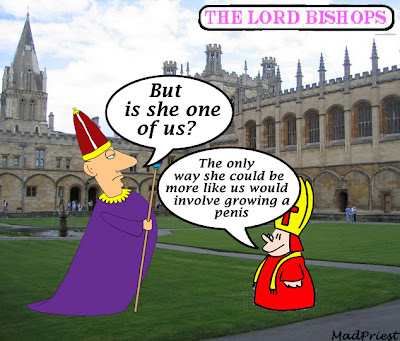