I don't earn any salary now but even when I was employed by the Church of England I was only earning about £22000 per year as I worked in one of the poorer paying dioceses.

So this story MAKES ME FECKING ANGRY!!!!

* The Bishop of Chester attended the House on 97 days, claiming £27,600 in attendance allowances and £7,309 in travel expenses.

In contrast, a number of bishops regularly attended the House but did not claim any attendance allowances at all. The Bishop of Birmingham attended the House of Lords on 22 occasions but claimed no money. The Archbishop of York attended on 16 occasions and claimed nothing. The Archbishop of Canterbury also made no charge. However, the Bishop of London claimed £3,750 for attending the Lords on 24 occasions.

So, the "oh so righteous" fundie Bishop of Chester's expenses claim is £5000 more than I ever earned per year in my life. He is claiming £21000 more than I now have each year to survive on.

It would also appear that, on the whole, evangelical bishops ask for more expenses than liberal bishops. 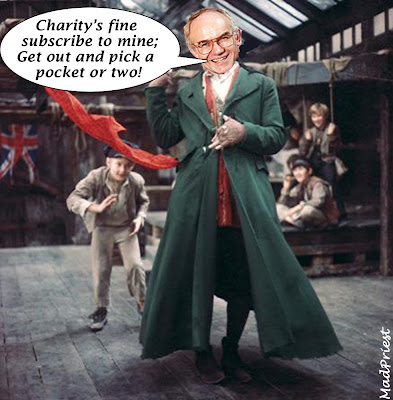