Reports this week that decades-old sexual abuse allegations at the Horace Mann School probably can't be prosecuted because of New York's statute of limitations raised new questions about why the state only gives victims up to five years after their 18th birthday to report childhood abuse. More than 30 states have already managed to ease laws on reporting child abuse, but the New York Times reports today that religious officials are pushing against similar efforts in New Jersey, Pennsylvania, and Massachusetts. The church has even hired lobbying and public relations firms to help their cause in New York and Colorado. In the latter, parishes have actually handed out postcards to parishioners and asked them to contact their representatives on the church's behalf. Cardinal Timothy Dolan, who's involved in a scandal over paying off abusive priests, has fought hard against the proposed law. 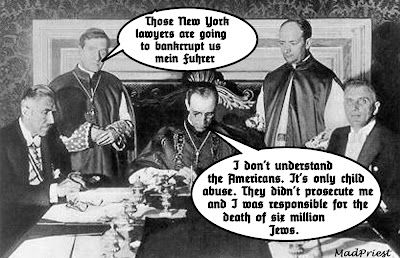