It's easy. If your team is losing and you are in charge of making up the rules of the game, you just get rid of the final whistle so that the game goes on for ever. That way, you need never admit defeat. Of course, if you have been well and truly defeated and there's no way to get around that fact, just pretend that you haven't. Ignore it. Act as if nothing happened.

These suggestions have been brought to you by the Archbishop of Canterbury, Doctor Rowan Williams.

No timescale is to be put on the adoption of the Anglican Covenant, the Standing Committee of the An­gli­can Communion (SCAC) agreed last week. The Covenant was discussed on the first of the three days of the committee’s talks, attended by the Archbishop of Canterbury and elected members of the Anglican Consultative Council and the Primates’ standing committee.

A statement released afterwards said: “The Standing Committee re­ceived an update on the progress of the Anglican Communion Covenant. It was noted that eight provinces had endorsed the covenant to date, in some cases with a degree of qualifica­tion. They were the only responses received so far by the secretary general.”

The Church of England, which rejected the Covenant when a majori­ty of dioceses voted against it in March, was not included in the responses received. 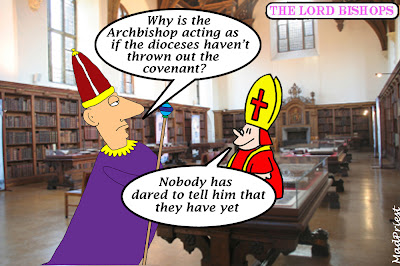