Cardinal Keith O’Brien, the Scottish enforcer for the Vatican (a small independent nation in Southern Europe), fears that schools will be banned from promoting traditional marriage if gay marriage is legalised. He was responding to a legal opinion from European human rights and employment law specialist, QC Aidan O’Neill. In his opinion, Mr O’Neill said parents will find it difficult to prevent their children from attending classes that promote homosexual marriage.

The legal opinion was sought by Scotland For Marriage. The group fears that classrooms will be flooded with teaching materials, including books and pamphlets, that promote gay marriage.

Cardinal O’Brien said, “If they enact Same Sex Marriage legislation there is no question that the work of Catholic schools and parishes will be impaired, undermined and damaged."

However, Mr O’Neill said: “The way in which the curriculum is delivered by school is covered by the anti-discrimination provisions of the Equality Act 2010 such that pupils should not be taught in a manner which may be thought to subject them to discrimination on the basis of sexual orientation. Scottish Ministers and local education authorities have obligation to have “due regard” to the need to tackle prejudice and promote understanding in relation to matters of different sexual orientation."

So, there you have it. Even though the legal opinion they paid for states quite categorically that nothing will change and that the Roman Catholic hierarchy in Scotland is already breaking European, human rights legislation by blatantly stigmatising gay young people, 10% of their own members and most of their own clergy, O'Brien still insists on telling big porkies.

And what's with his repeated use of the word "promote." Schools promote safe sex, getting a good job and abstention from drugs, that sort of thing. They do not "promote" any sort of marriage. It's not their business to. And when the Scottish government passes a law to give same sex couples the same right to marry as opposite sex couples (which they inevitably will because Scotland, for hundreds of years, has been one of the most enlightened and progressive nations in the world), nobody is going to promote same sex marriage. I mean, what is the crazy, old fear monger suggesting? That gay people will start taking out full page adverts in the Scottish press encouraging heterosexual people to give it up and become gay? 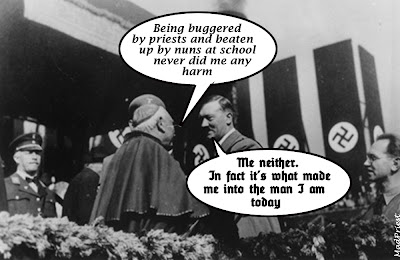