In a comment on my post I'M HAVING TROUBLE BEING SYMPATHETIC, my good friend, Klady (from the USA) states that, "Until fairly recently, a priest who divorced (or even was divorced), even with little or no "fault," had to leave his parish and possibly be unemployed or underemployed for some time."

This situation has definitely changed now in England although getting married to someone else after being divorced can still be problematic (the ease of doing so being dependent on the beliefs and personality of the divorcee's bishop). In fact, some bishops lean over backwards to help clergy ditch their spouses.

The nearest I ever came to being offered a vicar's post in Newcastle was when I went for the job of vicar of the two parishes of St. Hilda and St. Aidan near Whitley Bay. The representatives of St. Aidan's were in favour of my appointment but the reps of the "stronger" parish of St. Hilda decided that they wanted another candidate to get the job and they persuaded their colleagues at St. Aidan to back down.

Of course, the two priests involved were academic types who were close to the Bishop of Newcastle, but it still went to show how much things had moved on when it came to priests separating from their spouses. The Bishop of Newcastle (who personally oversaw and was present at the interviews) was much happier to employ a priest going through a divorce than a priest who had suffered from, but recovered from, depression ten years previously. 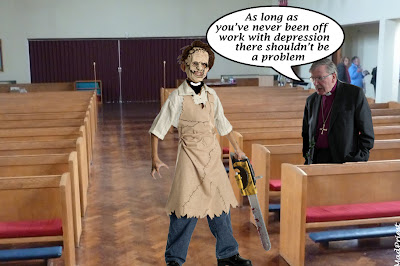