In a surprise last minute announcement, a spokesperson for Buckingham Palace has announced that the original line-up of the Sex Pistols (the one with Glen Matlock rather than Sid Vicious) has reformed and will be headlining The Diamond Jubilee Concert, attended by Her Majesty, The Queen, tonight. In fact, it has further been revealed that it was the Queen, herself, who asked for the group to be added to the bill. A completely unreliable source has whispered to OCICBW... that Her Majesty intends to stand right at the front, up against the stage, when they play their version of her song, "God Save The Queen." This is so she can be close enough to gob on them. 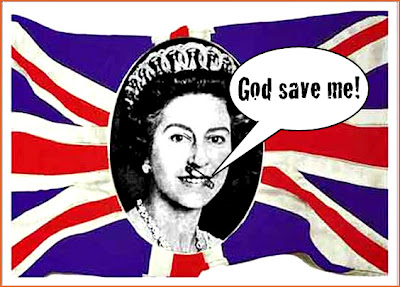 Unfortunately, back in this tediously predictable universe in which we live we have to put up with the worst concert line-up in the world ever. To be honest, I'd rather watch an old woman looking at boats floating by for three hours than spend a second watching this load of brain-numbingly boring tosh.