It is now two years since I was manipulated out of the priesthood by Bishop Wharton of Newcastle. It is two years since I last presided at holy communion in a church. At the end of that service I told the congregation that it was the last time I would be celebrating communion with them and probably the last time I would ever celebrate communion anywhere. At the time I was being a bit of a drama queen and didn't really believe that I would never celebrate communion again. Now, I know that I was in fact predicting my true future.

I applied for seventy new jobs but did not get one. I moved to the diocese of Durham, hoping a new start would result in my return to an active priesthood. But after nine months I still hadn't received permission to officiate and it became obvious, even to a stubborn fool like me, that I was not wanted here, that I was perceived as a problem and potential danger to the church. Nobody makes a person they want wait so long. So, during Easter this year I came to the conclusion that if God wanted me to be a proper priest God would not put up so many barriers in my way. Okay, it is common for Christians to go through a wilderness experience but, heck, even Jesus was cast out for only forty days. I realised that I was just being silly and gave up pushing.

Every morning, when I wake up, I think about what I have lost. Every night, I lie awake thinking about it. The searing pain is like a knife in my heart.

I have kept a sort of ministry going on the internet but it's lonely and doesn't pay enough for me to live on. That my faith in God has continued, grown stronger, despite the callousness of his so called shepherds who don't give a toss about the pain I'm going through, amazes me and sometimes leads me to feel proud of my tenacity. But mostly it just makes me realise how stubborn and stupid I am. 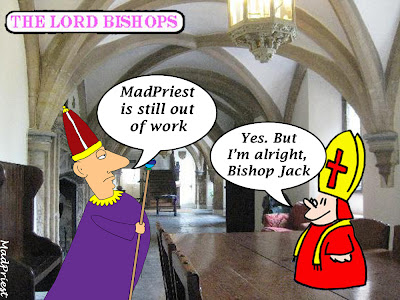