As I expected, Tim from Canada is very uneasy about my suggestion in my post CHURCH OF ENGLAND POT LUCK that churchgoers and potential churchgoers should be encouraged, by the honest advertising of individual churches, to seek out congregations in which they will feel comfortable and in which they will get the sort of worship experience most suited to their requirements.

Tim's uneasiness is understandable. He is a parish priest who works hard to keep a congregation, in which the various members have widely differing views, worshipping together. But Tim is also a priest who does not hide his own views or what he is thinking as he tries to work out what he believes about different subjects. His blog is public, confessional and far from anonymous.

In the Anglican Communion priests and other ministers, lay and clerical, have the great privilege of being allowed to say what they they think to a large extent and to preach sermons with a high degree of personal interpretation of scripture and doctrine. We are not Roman Catholics so we do not have an official party line on absolutely every aspect of our faith, and the party lines we do have are deliberately ambiguous so that we can include as many people as possible within our church (a policy that goes back, at least, as far as the reign of Elizabeth I in England). There are preachers who avoid all controversy by preaching the same platitudes of our religion week in, week out (often priests who have lost their faith) but it would be unlikely for their congregations to come away from their services feeling that they had learned something from the sermon. Good preachers (preachers who teach and encourage their listeners to think) tend to put a lot of themselves into their sermons and also enough of a controversial nature to keep their congregations awake.

A Roman Catholic can attend any Roman Catholic church anywhere and hear pretty much the same sermon on any particular Sunday that they would hear in any other Roman Catholic church that day. The only reasons to favour one Roman Catholic preacher over another would be concerned only with delivery and rhetorical finesse. The content of the sermon will always be as expected. This is not so with Anglicanism (thank God, in my opinion). We expect that we will not always agree with everything our preachers say. We expect to hear new ideas, new ways of looking at a text, new ways of living the Christian life. Our preachers are all individuals, most definitely not all batting on the same wicket.

The individuality of the parish priest is not only observed in his or her preaching style but in most aspects of their ministry, including the administration  of their parish. In most churches the parish priest is at the centre and is the most influential member of the congregation. Contrary to what we may claim and contrary to what we might want "in an ideal world," the parish priest defines, to a large extent, the style and ethos of the church community he or she "serves." In fact, let's be honest about this, those churches where the parish priest does not have this role are usually unpleasant places to be for any length of time as the laity and other ministers, individually and in groups, will be constantly fighting each other to get what they want.

So my question (a follow up to the questions I raised in my post CHURCH OF ENGLAND POT LUCK) is this: should we ignore this reality or should we celebrate and advertise it so that those looking for a place to worship, to listen and to join in, can easily find a parish priest with whom they can relate to and not feel threatened by - a parish preist that they will like?

Jesus Christ was a personality cult. Would we have a stronger, better attended church if our parish priests had strong personalities which drew like-minded people into their churches? Or should we continue with that style of priesthood common in so many of our churches, which is a "lowest common denominator" style avoiding confrontation and offence, where sermons always start with "some people think" and are always qualified with an "on the other hand." The latter allows congregations containing a broad range of beliefs and attitudes to worship together, but does it make better Christians? Even more important, would somebody entering such a church for the first time want to stay? 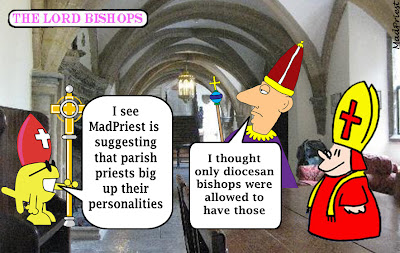