... but the last time I swore was nearly seventeen years ago during all the legal stuff before my ordination. I swore before God that I believed in all sorts of stuff. I actually believe this was a sin and against the teachings of Jesus Christ, but the bishop was very old fashioned and, back then, I didn't have the courage to argue with important people.

I never blaspheme on my blog (at least, not linguistically). The nearest I get to blasphemy is an occasional, ironic "OMG!" I'm not saying that I never blaspheme off the internet but I try my hardest not to. I use "heck" and "my goodness" a lot and prefer "O shit!" to invoking the name of the Son of God when I drop  and break a glass or something.

As for "bad language," I don't believe it exists. There is language, that is all. The fact that when you ask different people to list words that are unacceptable they will not agree with each other on what should be included on such a list, emphasises how nonsensical the splitting of language into good and bad words really is. To be honest, if a person believes a certain word is taboo, that's their hang-up and not my problem. However, I don't go out of my way to upset people who have done nothing to upset me and so, if I'm in the company of someone who might not like me swearing, I try not to. But that's just politeness, it's nothing to do with right and wrong. In my own home and on my own blog, in the presence of my friends I use "swearwords" freely. I like them. I like the sound of them. I like the way you can use them creatively to create atmosphere and emphasis. As I believe that sexual intercourse is a good thing, I'm not going to pretend that a word describing it is in some way a bad thing. That don't make sense.

Oh, and Jesus swore like a trooper. If anyone thinks that the phrase "you nest of vipers" is in anyway less of a curse than "you complete and utter bastards" all I can suggest is that you get real. 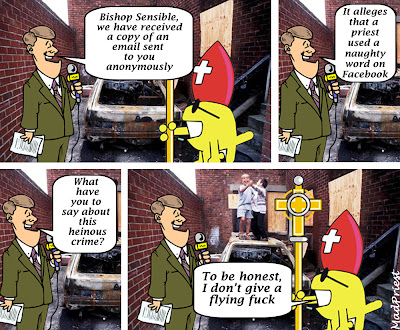