The comments began on a Saturday evening and included comments such as "I think I will put my feet up" and "I hear the fizz of tonic in my gin beckoning." The vicar reportedly went on to post: "Alas, I have religion tomorrow. At least I'm not preaching this week. Preaching next week at St Mary Abbotts Kensington though. Best make that a good one eh?"

The Facebook extracts, accompanied by an anonymous letter, were sent to the Bishop of Sheffield Dr Steven Croft and the Bishop of Doncaster the Right Reverend Peter Burrows. The canon's posts used language that was "abhorrent for a man in his position and pretty distasteful for anyone", the complainant is said to have written.

I recognise that Screwtape language, it's Trollish. This particular troll will be so pleased that the Bishop of Sheffield can be played and responds to anonymous emails.

If I was a bishop and received an anonymous email about a priest's "bad language," I would email straight back with a succinct "Piss Off!" Unfortunately I am not even a priest anymore, let alone a bishop, so the church in England carries on in its traditional, dreary, predictable way to the oblivion of utter insignificance. 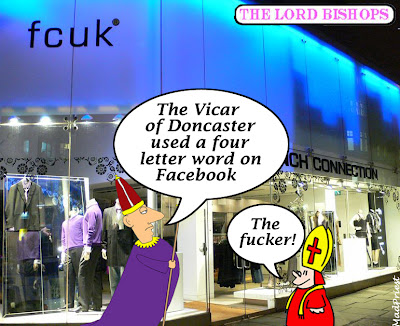 Hat Tip to Thomas on Facebook for alerting me to this story.