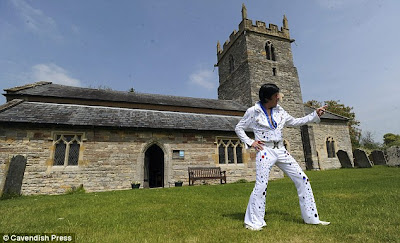 A Church of England vicar has left his congregation all shook up after quitting his job - to become an Elvis Presley impersonator. The Reverend Andy Kelso, 64, ditched his dog collar to wear a high collar and jewelled white jump suit after saying he had a calling from God. Now, the father of five has been dubbed 'Elvis Priestly' after he stopped preaching from the pulpit to belt out The King’s classics to other churches, packed-out pubs, clubs and old folks homes near his former vicarage.