From THE SUN STAR (The Philippines):

A man in shorts and a red strapless bra danced like a woman on one of the boats during the fluvial parade. Other men wore floral dresses and wigs, their lips and cheeks smeared with lipstick. After the fluvial parade, the men gathered in front of the chapel and shouted as they watched a fight between a kitten and a frog. In the middle of the crowd, a shirtless man wearing heavy make-up carried a basket with a signboard that said: “Pizza for Sale.” Inside the basket were lumps of manure topped with ketchup. Two men walked around with a large wooden replica of the male sex organ attached to their waists. 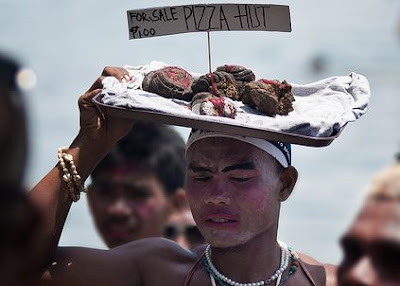