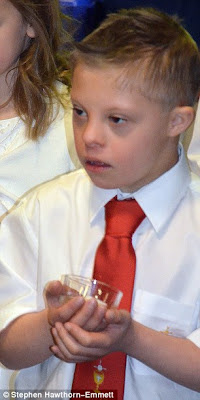 When Denum Ellarby walked down the aisle with his classmates to take Holy Communion for the first time his parents felt a mixture of pride and relief. For the family have had to battle what they regarded as ‘cruel discrimination’ by the Catholic Church to ensure their eight-year-old son with Down’s Syndrome could take part in the important First Communion ceremony.

Until the Daily Mail highlighted his plight in January the local priest, backed by the diocese, was refusing to allow him to take part as he would not understand the preparation classes or ‘enjoy participation in Mass.’

His mother Clare Ellarby believed his disability was responsible for the church’s refusal to accept him and collected a 400 signature petition in support of Denum from the local community.

In the wake of the bad publicity the church had a change of heart.

People used to write into my blog and accuse me of being anti-catholic. I used to reply that I was not anti-catholic, I was just anti the abuses of the denomination. Nowadays I don't bother.The bigger the gap between me and them the better. I get enough flak from non-Christians who believe I belong to the same religion as evangelicals. Now I get flak because they believe I belong to the same religion as the sort of monsters who put parents like Denum's folks through a living hell because of some technicality that would never have occurred to Jesus or John the Baptist. I mean, can you imagine Jesus bothering to test a person's IQ before letting that person share in his body and blood?

I'm beginning to think that, whatever denomination they belong to (including my own), Christ-centred Christians should leave their churches and start worshipping together just to show the world that there really can be good news in all this Jesus stuff. I don't think we should start our own church, though. That experiment has proved to be a singular failure of the highest order.