I'm listening to the book, "The Key" by Simon Toyne at the moment. It's the follow up to his debut, Sanctus," and is a ripping, conspiracy yarn about the evil Roman Catholic hierarchy and its misogynist agenda and financial skullduggery. Like Dan Brown's stuff it sounds a bit far fetched at first. That it is until you read news reports of real life within the Vatican corridors of economic power and exposes of abuse cover ups. Then fiction seems a lot less stranger than life.

Forensic police swarmed the crypt of a Roman basilica on Monday to exhume the body of a reputed mobster as part of an investigation into one of the Vatican's most enduring mysteries: the 1983 disappearance of the teenage daughter of one of its employees. Medical experts took samples from the remains of Enrico De Pedis and also took boxes of old bones from the nearby ossuary, according to a De Pedis family lawyer, as part of the investigation into whether Emanuela Orlandi may have been buried alongside him. Orlandi was 15 when she disappeared in 1983 after leaving her family's Vatican City apartment to go to a music lesson in Rome. Her father was a lay employee of the Holy See. De Pedis, a member of Rome's Magliana mob, was killed in 1990. His one-time girlfriend has reportedly told prosecutors that De Pedis kidnapped Orlandi, and an anonymous caller in 2005 told a call-in television show that the answer to Orlandi's disappearance lay in his tomb.

Amid a new push to resolve the case, the Vatican said last month it had no objections to opening the tomb. On Monday, Vatican spokesman, the Rev. Federico Lombardi said the inspection of the De Pedis tomb was "certainly a positive fact" aimed at carrying out "all possible steps so the investigation could be completed.

"The prosecutors' office can continue to count on the full collaboration of the church authorities," Lombardi said in comments to reporters.

Yes, we've heard that before. Somehow I'm not convinced. 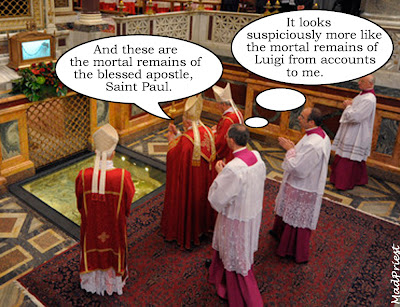