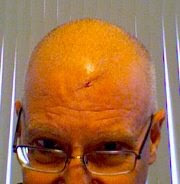 This is our good friend, Paul Strid's enormous head. It has to be so big to contain his enormous brain.

And Paul's enormous brain has been working on enormous project for a long time now that has just come to fruition. "The Demon Chasers" is the first part of a saga entitled "The Chronicles of Mídhris," in which Paul has created a complete alternative universe (with maps). Here's the blurb: 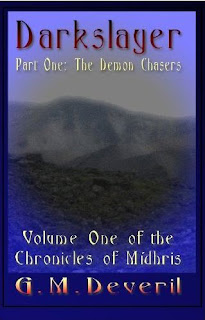 A teen from Queen Anne's England unexpectedly finds himself in a parallel world, launching an adventure that spans centuries. Ian the Stranger faces the challenge of defeating a demon of darkness that is ravaging his new-found world, since "nothing in the world will overcome it but it will be overcome." He and his companions follow the tracks of the demon's destruction, doing their best to decipher prophecies and overcome obstacles.

The two bravest among the Norrung tribe are separated as Njothir, their chief, must remain at home to guide the people while his soul mate, Ringskild the warmaiden, is chosen as captain of the band. Pjortan the star singer is sent for spiritual protection and guidance and Wulfdar the healer is at hand for mishaps. Jannir the merchant guides them through strange lands and Meldreth, a lecherous warmaiden, always has entertaining stories to share. Others round out the band, each carefully selected for a quest that seems both foolhardy and absolutely necessary.

From a tribal warrior society to sophisticated feudal courts to realms beyond habitation these travelers pass by way of plague-destroyed villages, their first voyage at sea, alehouses, and dungeons. New companions join them, whether desired or not, including a rash count, a magical baroness, and a smooth-talking thief. From the beginning they enjoy the company of a most unusual wolf.

The Chronicles of Mídhris recount the story of Ian's earthly family in two worlds as they play crucial roles in the history of Mídhris down through several centuries. Magic, mythology, social upheavals, and personal adventures are woven together in a richly textured world of imagination. History unfolds in the dramas of the human heart, a stage that is the same in both worlds.

Wow! Right up your street, I would guess. And you can purchase it for a measly $6.17 (£3.82) in Kindle format from Amazon. Remember you don't need a Kindle to read a Kindle book. You can download it to your computer and there are apps for various mobile technologies. Paul has even set up a blog called THE CHRONICLES OF MÍDHRIS on which he is posting loads of stuff that will add to your enjoyment of his book. Now that's what I call "value added." If you order Paul's great opus (part one) using the widgets below, I will get commission and it won't effect Paul's cut. Go on, treat yourselves and make all Paul's hard work worthwhile.