Back when the Church of England agreed to ordain women to the priesthood, General Synod agreed a plan that insisted that bishops, who thought women were not made in the image of God, would be ordained to provide separate (from the diocesan bishop) oversight to those members of the clergy (and their congregations) who also believed that women were not saved by the incarnational actions of Jesus Christ. Of course, this was a foul, uncatholic provision that made the Church of England look like an anochronistic bastion of chauvinism and bigotry to the citizens of England who had long ago accepted that women were human too. But it did have a sort of logic to it.

This logic has been completed confounded by the appointment of Bishop Martin Warner to the see of Chichester. Warner is a staunch reactionary from that part of the Anglo-Catholic party in England that is dominated by old school gay priests with an almost misogynist fear and jealousy of women. He is now to take on the headship of a whole diocese in which there are both women and men in the priesthood. But he doesn't believe women can be priests and he certainly won't ordain women to the priesthood. This is like the prime minister of England not accepting that the female members of parliament have the right to vote in Parliament. How can somebody help you realise your priestly vocation if they don't believe you are a priest in the first place?

There are no flying bishops available to provide pastoral oversight to the female priests and non-misogynist church members of Chichester Diocese. Therefore, the Church of England is rejecting a whole section of its membership in Chichester from the episcopal care that is a central mark of the catholic identity of the English church. If we are still reneging on the promises we made to women back in the 1990s I fear there is little hope of women becoming "real" bishops in the Church of England anytime soon. If General Synod does vote to allow women to join the house of bishops it will be an act of straw. The continued promotion of men to positions of authority over women (whether women like it or not) without also the promotion of women to positions of authority over men (whether men like it or not) is just another embarrassing example over the entrenched patriarchalism, hypocrisy and self-interested selectiveness that has led to the Anglican church in England becoming less relevant to the English than the Flat Earth Society. 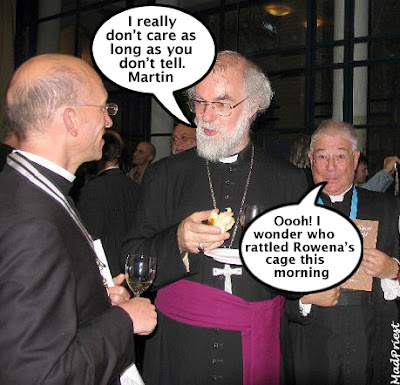