A Scottish Episcopal church in Edinburgh has unveiled a mural of two men marrying in a religious ceremony. St John’s Church on Princes Street, one of Edinburgh’s main streets, has a history of topical murals going back thirty years, displayed in full view to passers-by on the busy road.

Donald Reid, Associate Rector at the church, said many photographs have been taken but there had been no negative feedback to the mural whatsoever since it was erected on Saturday. The image of two men, one about to place a ring on the other’s finger while a priest looks on under the words ‘God is love’ should stay up on the side of the church for two weeks. 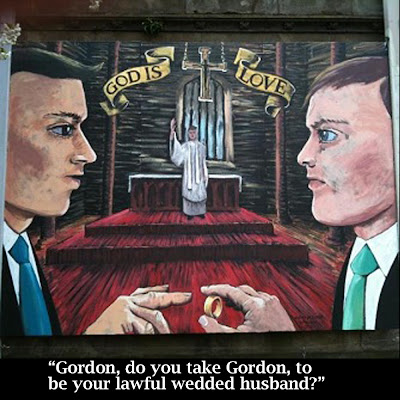